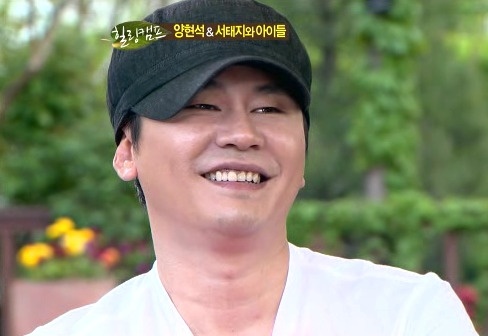 YG’s Son to be Heir of YG Entertainment?

The head of YG Entertainment, Yang Hyun Suk, became a father for the second time this past April.

Yang Hyun Suk appeared on the latest broadcast of SBS’ entertainment program “Healing Camp.” During the show he revealed family pictures, including those of his first son (second child), to the public.

Along with the photos, President Yang revealed the meaning behind his son’s name, saying, “My first son shares the same name as Big Bang’s T.O.P and Seungri’s real names, which is Seunghyun. We chose ‘Seung’ as in victory and the second name ‘Hyun’ is also part of my name.”

He continued, “If anything happens to me, I hope that Seunghyun will be able to take over as the heir of YG Entertainment.”

During the broadcast he talked about his time with Seo Taiji and the Boys. And then how he met wife Lee Eun Joo and their secret nine-year relationship all the way to when they got married. He also discussed how last summer between Big Bang’s G-Dragon and Daesung he suffered with a panic disorder. When he heard the news of each member’s incidents it caused him to have a panic attack.

Back in 2010, through the YG Life blog, Yang Hyun Suk mentioned and announced his marriage to former Swi.T member Lee Eun Joo. In October of that same year, the couple’s first child, daughter Eugene was born.