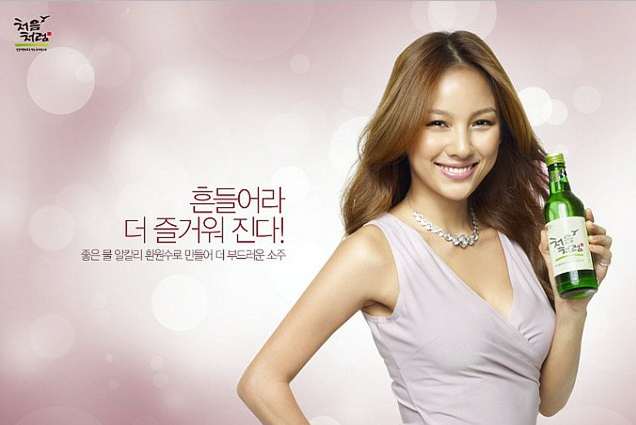 A little introduction to Soju

Soju was first brought over to Korea in the 14th century by Mongolians during the Yuan Dynasty. The “ju” in soju is sometimes written as the Hanja “ju” that means alcohol, but the original character stood for the process that required fermenting and distilling the alcohol three times. During the Josun Dynasty, drinking soju at home was considered an unnecessary luxury, and manufacturing of soju was banned.

Today soju is for lack of a better term, the official drink of Korea. You can find it in every bar, club, and restaurant in the country. People both young and old, businessman and student alike drink it. And for many college students drinking soju has become a right of passage. To put it simply, soju is a big part of Korean life, and the companies who manufacture and sell it spend a lot of time selecting the idol who will be the face of their brand. Hyori is probably one the best known Soju Goddess. But there are many many more.

Browse through the gallery to learn more about soju and meet the sexy Soju Goddesses who represent this iconic Korean drink.

The Difference Between Beer and Soju

Kim Hun, the Creative Director at Oricom who headed the advertising for soju “Like the First Time,” gave an interesting statement:

Soju’s alcohol content is stronger than 17% and therefore can’t air commercials on public TV… that’s why soju commercials are usually designed for print media and as posters to put up in stores.

Soju was consumed predominantly by males, but recently a ‘softer soju’ has been emphasized. Female celebrities have become more active in advertising soju in attempts to portray a cleaner, softer, and more confident image.

On the other hand, beer is now trying to appeal to the emotions, and positioning itself as a young and light, ‘feel-good’ option through its TV ads. Celebrities such as Big Bang, Psy, and 2PM are modeling beer in order to stimulate the emotions and add a jolt of excitement.

Jinro used Song Hye Gyo in its first makeover in fifteen years. The following year, it used Shin Min Ah in a campaign to advertise a lighter, slimmer, and weaker soju, but unfortunately, the brand has still disappeared.

My Name is Chejangsu, Chu Eum Chu Rum (Like the First Time)

Lee Hyori ranks among the longest serving models for soju, already on her fifth year. This soju features special characteristics due to its alkaline water, and has been popular among many people thanks to Hyori.

Actress Lee Young Ae started the era of women as soju models in 1999. After her, Hwang Soo Jung, Park Joo Mi, Kim Jung Eun emphasized that they only drank Ee Seul, and Kim Tae Hee debuted at the same time as her “A shot of soju with me?” advertising campaign. After her, Sung Yuri, Nam Sang Mi, Kim Ah Joong, Kim Min Jeong, Ha Ji Won, and 2011 was the year of Lee Min Jung.

The term “bagel girl” refers to a girl with a baby face and a glamorous body, starting from veteran Song Hye Gyo, followed by Han Ji Hye, Sun Woo Sun, Shin Se Kyung, and Yoo In Na. By using bagel girls as models, these advertisements aim to sell a young, refreshing drinking experience that leaves no aftertaste.