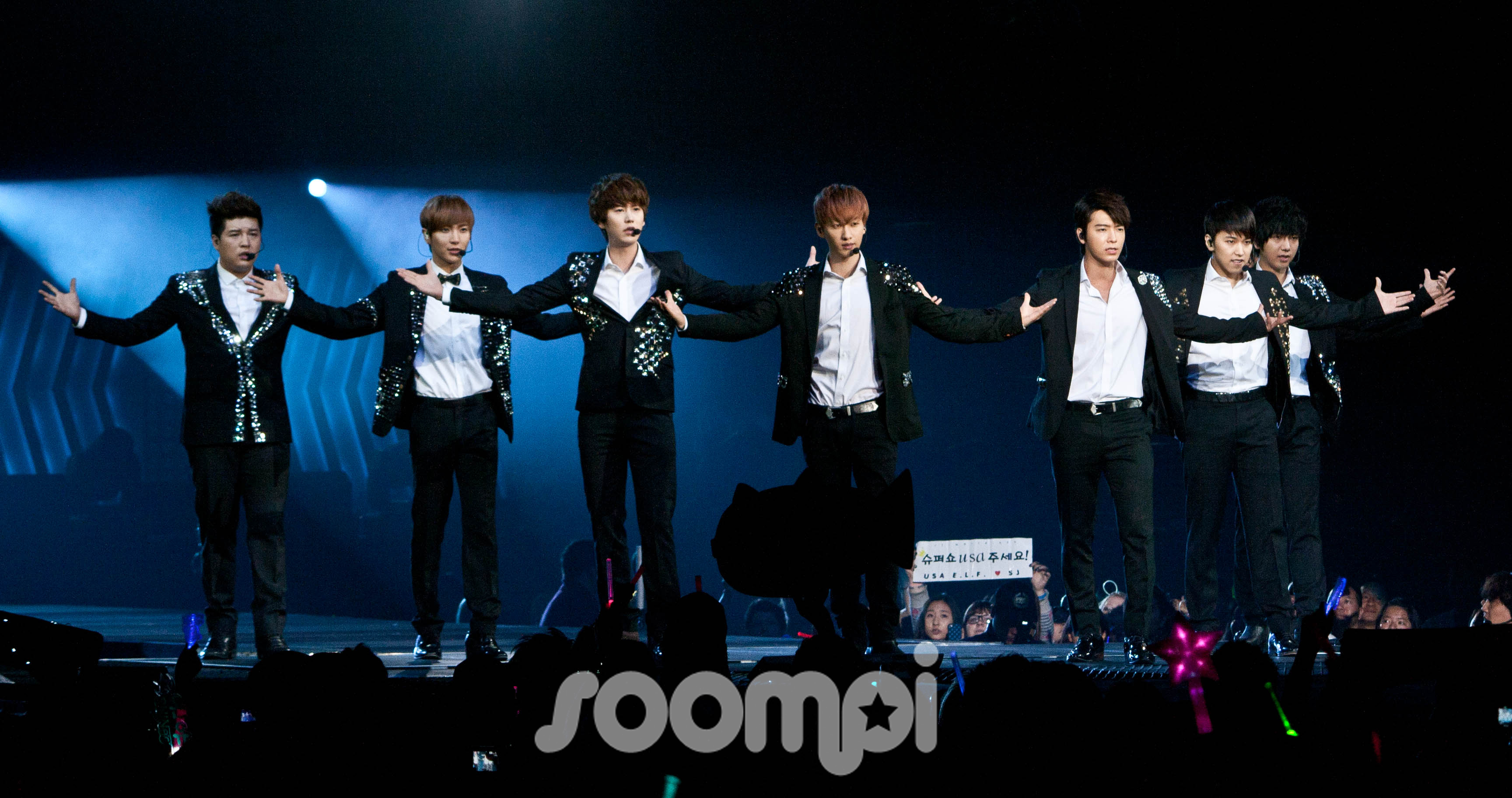 After touring across the world for the past year, SM Town made their way back to Anaheim for the first stop on their SM Town Live World Tour III!

On the evening of May 21, SM artists BoA, DBSK, Super Junior, Girl’s Generation, SHINee, f(x), and EXO united tens of thousands of K-Pop fans at the Honda Center in Anaheim, California. In the four hour concert, each idol performed their hit song and created an unforgettable experience for the audience.

Emcees Tiffany, Taeyeon, and Leeteuk began the show with a kind message to the audience.

Tiffany: “Because of you, we are here again! The love we get from you makes us want to work harder. (We have) an even more dynamic show for this season. Start!

The opening performance for a concert is critical for setting the crowd’s energy. Without a doubt, SHINee kicked off the show with an explosion with “Lucifer.” Dressed in coordinated black and white outfits, the five shining boys proceeded with their older songs, “Amigo,” “Juliette,” “The SHINee World (Doo-bop),” “Love Like Oxygen,” and “Ring Ding Dong.” SHINee closed their final stage with their hit “Sherlock” which received much love from their recent promotion cycle.

I was hoping SHINee would perform “Replay,” one of their signature songs, but they put on a spectacular show with their set list. SHINee spiced up their performances with rock remixes along with different dance breaks. And these weren’t your typical end-promotion remixes. I’m talking about hardcore rock, head-banging remixes and dance breaks. The dance was so intense that Key had to pause on the side of the stage during “Amigo” to fix and re-secure his shoe!

Key, the resident English speaker in SHINee, gave a friendly greeting to crowd: “Long time no see. Are you guys having fun tonight? (Audience screams). Thank you!”

Leader Onew followed with a short speech to show his gratitude: “We love the feeling in the room. Because of you, we are at this place today.”

(Karen notes: Key, Taemin, and Onew’s hair are made for head-banging. Jonghyun has amazing arms, and you can definitely tell Minho has been following in his hyung’s pathway and working out a lot.)

Sunbae group Super Junior entered the stage with the powerful chanting “Bam bam bam bam bam” for “Superman” and “Don’t Don.” While watching their performances with “Put Your Hands Up,” “Bonamana,” “Sorry Sorry,” “A-CHA,” and “Mr. Simple,” it really hit me that most of Super Junior’s promotional songs have a masculine, cool, tough guy feel.

They brought back their characteristic fun, carefree, and dorky image with “Dancing Out.” The duo Eunhyuk and Donghae played with the audience and gave some fanservice as they jokingly thrust their hips at each other.

Leeteuk made of the most memorable introductions out of all the artists! He yelled, “Hiiiiiiii LA!” and made this face “>o<“. He pointed the mic at the audience and asked “My name is…” and the crowd yelled back “Leeteuk!” The happy leader commented, “Wow, genius! We can’t start the next song until you guys are louder!”

(Karen notes: Super Junior makes walking look extremely sexy! Although the entourage looked smaller than usual with only Leeteuk, Yesung, Shindong, Donghae, Eunhyuk, Sungmin, Ryeowook, and Kyuhyun, they strut down the catwalk oozing with confidence. Also, their LED jackets for “Mr. Simple” were quite cool.)

While f(x) only performed three tracks, “Hot Sumer,” “NU ABO,” and “Pinocchio,” they received enormous support and cheers. Amber in particular pumped up the energy by conversing with the audience.

She teased everyone by asking in English, “Can I have all the sexy people in this stadium scream?! Who’s already losing their voice?” She followed with “I think Luna wants to say something,” and handed the microphone to Luna who cutely said “I love you!”

You could tell Amber was having too much fun! She told the audience, “I’m going to take this (ear piece) out to hear you scream!” She was so focused on the audience that she accidentally bumped into Krystal.

(Karen notes: Although they are juniors, I hope f(x) can get more stages in the future. You can tell they are natural artists who love standing on the stage and performing!)

Rookie group EXO finally held their first stage in America for “History” and “MAMA.” I think the curiosity of seeing a new group with new faces and new talent made the audience even more excited. EXO-M first entered the stage with “History,” while EXO-K switched in after the first chorus. For “MAMA,” they reversed the set-up with EXO-K performing the first bit, and EXO-M performing the next part, and both units joined together during the dance break.

When all 12 members united on the stage, you wouldn’t have guessed that the two groups promoted separately in different countries. Just like their label mates, they were spot on with the choreography, positions, and transitions.

The excited boys continued to praise the fans, and give their love, happiness, and thanks to the audience during their introductions!

(Karen notes: It’s always entertaining to see a new group, and EXO definitely piqued my interest. Judging by the quality of their performance, I can see that they’ll do well in their future idol career. )

Girls’ Generation came in second place after Super Junior for the most performances that night. Totaling at eight songs, they performed their hits “Run Devil Run,” “Genie,” “Kissing You,” “Himnae,” “Gee,” and “The Boys.” We also had two special stages with Taeyeon’s amazing rock solo “Devil’s Cry,” and the adorable TaeTiSeo with “Twinkle.”

To the disappoint of fans, Yuri and Yoona were absent from the concert as they were filming their dramas. Tiffany added, “Unfortunately we couldn’t come with lucky number nine, but we are here with lucky number seven! You can help us fill in (for their absence).”

After she asked the audience to support Yuri and Yoona’s dramas, Tiffany paused and said, “So… this is awkward.” She laughed and gave her eye smile, saying “Let’s go Soshi, let’s go!”

(Karen notes: Taeyeon is so versatile on stage! The change from the cutesy “Twinkle” to rock queen in Devil’s Cry” is incredible. Loved Tiffany’s “Anaheim, put it back on!” Lastly, the crowd shouting “GG” and “TRX” for “The Boys” was by far the most impressive fanchant that night. Here’s a JeTi photo, enjoy!)

Queen of K-Pop, BoA, performed five songs “Look Who’s Talking,” “Energetic,” “One Dream,” “I Did It For Love,” and “Hurricane Venus” towards end of the whole concert. Unlike her hoobaes, she performed all fives songs consecutively without stepping off the stage! SHINee’s “diva” Key joined the queen on stage for “I Did It For Love,” and EXO-M’s Kris joined the two of them for “One Dream.”

She pointed into the far back corner of the auditorium and said, “I think our boss is over there. I feel like I’ve been performing these (English) songs for a long time.” The whole crowd laughed as BoA jokingly hinted at the boss that she wanted to record new songs (Yes, please!).

I respect BoA because of her accomplishments and legacy, and tonight she continued to exceed expectations. The petite queen poured her energy into the crowd and hyped everyone up, telling us “Please lose your mind. Do whatever you want – just jump, shake your booty!” Her home is the stage, and she was not afraid to be routine free.

While it was a smaller set list than other groups, DBSK had a good selection of five songs: “The Way You Are,” “Mirotic,” Maximum,” “Keep Your Head Down,” and “Rising Sun.” Their first and last stage seemed to catch fans off-guard but also made them more ecstatic because they are much older songs (seven and eight years old respectively).

Changmin and Yunho‘s performance standards reflect their near-decade long experience on the stage. I have friends who aren’t familiar with them, but were blown away and complimented their impressive vocals with powerful choreography in “Rising Sun.”

(Karen notes: Yunho’s expressions show the merit of years of practice. He completely absorbs himself in the dance and energy. It’s really entertaining and fun when Changmin hits his famous high notes, and the whole room goes berserk just screams their lungs out with him!)

The SM artists highlighted during their press conference that teamwork is their specialty. Accordingly, they delivered four special stages covering some of the hottest American songs from the past few years.

First up was Onew and Luna’s duet cover of “Can I Have This Dance” from the soundtrack of “High School Musical 3.” The two are known for their powerful, yet warm and comforting vocals that are well-suited for ballads. Closing the sweet song, Onew knelt down before Luna, and the audience cheered wildly as they held hands.

The Jung sisters followed up with Katy Perry‘s “California Gurls,” a perfect song for the California-native girls. In the previous SM Town tour, Jessica and Krystal covered Ke$ha’s “Tik Tok” which caused a sensation! With Jessica dolled up in a sparkling pink mini-dress and Krystal sporting a pastel blue blouse and skirt, the two rocked their special sibling stage.

DBSK’s Changmin and Super Junior’s Kyuhyun swept the crowd away with their rendition of Bruno Mars‘ “Just The Way You Are.” They teased around on stage, pretending to sing the sweet lyrics to each other. Because of the nature of the lyrics, they brought up a fan from the audience and serenaded her on the center stage! The volume in the auditorium quickly rose with many more screams of happiness (perhaps some jealousy as well!).

Amber, Key, and Kris united on stage for the last stage cover with Far East Movement‘s “Like a G6.” While the other special stages were fun and sweet, this rapping trio tore up the stage with their swag and choreography, ending the special stage segment on a high note and soaring energy!

After all seven SM Town groups performed, emcees Tiffany, Taeyeon, and Leeteuk returned to the stage with the signature pink SM Town t-shirts as seen in the image above, signaling the end of the concert. Drawing a close to the amazing four hours, all artists united on stage for the closing song which was topped with confetti and balloons. It’s always bittersweet to depart from such an experience, but the SM artists gave the audience an unforgettable memory.

Check out the rest of our photos at the SM Town Live World Tour III in Los Angeles gallery! Also check out photos and the complete video of SM Town’s press conference that was held before the concert.

Thank you SM Entertainment and Powerhouse for the opportunity to attend and review this event.

Did you attend the concert? Tell us your thoughts and your favorite part of the concert below!