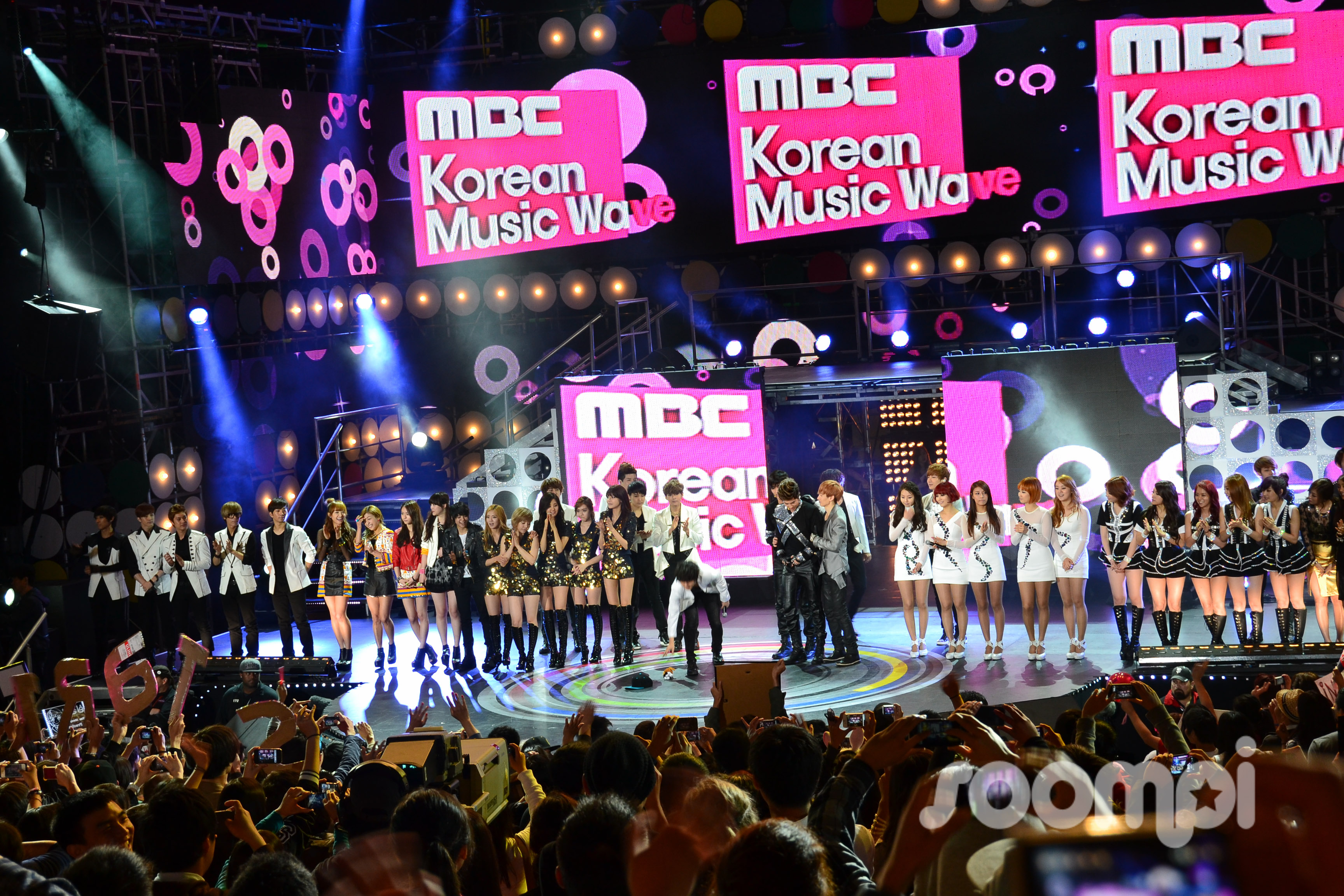 On May 21 many of K-Pop’s most popular groups came to Northern California to perform at the MBC Korean Music Wave in Google.

With an all-star lineup of Kara, MBLAQ, SISTAR, f(x), BEAST, Girls’ Generation, Wonder Girls, Super Junior and DBSK, this was surely a unforgettable night for those in attendance. Held at the Shoreline Amphitheater in Mountain View, California, the show was also streamed live to a worldwide audience on MBC Kpop and YouTube presents.

Since seating was first come first serve, fans began to line up as early as 4 a.m. By the time the doors had finally opened at 5 p.m., the line was almost a mile long and extended alongside Google’s main campus.

As 7:00 p.m. drew closer, a countdown clock began playing on the screens showing the various artists was played, eliciting many screams in anticipation. By that time the venue was filled to capacity with over 22,000 K-Pop fans ready to begin this epic concert.

MCing the event was Girl’s Generation’s Taeyeon and Tiffany. Just the night before, the two were also the MCs for SM Town Live World Tour III in Los Angeles along with Super Junior’s Leeteuk. While all the SM Entertainment artists performed a four hour long concert the previous day and flew up to Northern California from Los Angeles earlier in the day, you could not see any signs of fatigue on them.

“Today we are celebrating the content distribution agreement between Google and MBC,” said Tiffany. “The agreement between two companies in two countries will surely benefit K-Pop artists now and in the future.“

Starting off the show was Kara and their lively dance track “Step.” This was a great way to start the concert as their energy would warm up the crowd for the rest of the night. After performing the opening song, they would come back later to perform “Lupin” and “Mister.” Nicole, nervous from the fact that the concert was streamed live, thanked fans for loving K-Pop and supporting the Korean wave.

Next to come out and perform was MBLAQ. Performing their hit songs “This Is War,” “Y,” and “Oh Yeah,” they were the first boy group to step on stage and opted to show off their powerful dance moves. Throughout their performances they looked very focused on their choreography. During their talk segment, they highlighted that through YouTube and the Internet, global fans have been able to follow and become closer to K-Pop.

SISTAR’s turn was next and started with their latest song “Alone.” “Ma Boy” was definitely a crowd favorite as many fans stood up to do the famous body wave along with the girls. Ending with their energetic song “So Cool,” all their performances showed off their style of elegant sexiness.

f(x) started their performance with “Pinocchio (Danger),” followed by “Hot Summer” and “Nu Abo.” Even though it has been a while since they last promoted a new song, their performances were still well polished and full of energy. Just like the previous day at SM Town concert, Amber was a huge crowd favorite. She teased the crowd, suggesting everyone to go to the beach afterwards.

There were two special solo performances. Wonder Girls’ Sunye sang an emotional ballad “Father,” which was originally by Insooni. Singing from the upper stage, the translated lyrics appeared on the screen behind her to give the audience a sense of how beautiful the song was. As the only ballad performance of the night, Sunye did a great job of conveying her emotions to the crowd.

Girls’ Generation’s’ Seohyun also had a special solo stage and performed “Flying Duck” by Cherry Filter. To her, it was a song that had always given her strength and was something she had wanted to perform. Standing alone with a pink guitar, Girls’ Generation’s maknae was able to rock the stage.

BEAST started their turn with two of their most popular songs “Shock” and “Fiction.” It was really fun to see that a good majority of the audience was throwing their hands up in the air to “Shock!” along with the guys. Ending on a happier note, they completed their set with “Beautiful.” This was a really fun song as they were trying their best to interact with crowd and create more audience participation. The choreography for it seemed improvised as they ran around around the stage and pointed at the crowd to sing along.

Girl’s Generation’s entrance had one of the loudest cheers all night. Starting out with the English version of “The Boys,” they also performed “Mr. Taxi” and their mega hit “Gee.” All three songs were very solid performances that showcased their vocal and dancing abilities very well.

Unfortunately, only seven members of the group were present due to Yoona and Yuri being busy with filming their dramas. They playfully asked the audience to give their energy and take the place of the two missing members. For Jessica, this was a special event for her as she was really happy to perform near her home town.

Wonder Girls, the lone JYP group at the event, took the stage with “Be My Baby” followed by their classic hit “Tell Me.” Before performing “Nobody,” they had the audience stand up and learn them how to do the dance.

Despite not promoting too much in Korea the last few years, the girls received a lot of love from the audience.

Super Junior had the most unique entrance of the night as some members appeared in various locations around the theater when they began performing “Superman.” Continuing on with “Mr. Simple” they got a lot of the crowd on their feet to dance along. As expected they ended with their mega hit “Sorry Sorry.”

Leeteuk said “We just came back from LA from last night’s performance. Out there it was lovely, but here it’s even better.” He continued to tease the crowd, “I feel like we should have come here earlier.. should we come here more often?”

Performing last for the night was DBSK. Starting with “Keep Your Head Down” the duo followed it up with their R&B track “Before You Go.” Finishing with an older song, “Rising Sun,” they ended the night with a high energy level. Their fast paced choreography and Changmin’s screaming long notes from the song were amazing to experience live.

For the grand finale, all the groups came out together for a final bow, followed by a joint performance of “Arirang,” a popular Korean traditional folk song.

This was easily the biggest K-Pop concert to ever hit Northern California, and the fans in attendance definitely showed their appreciation for the artists. While it would have been nice to see more special stages and collaborations, having these top groups perform live on the same stage already made it an unforgettable night.

Lastly, since this whole concert was aired live on YouTube, the performance videos were made available shortly after the concert. Enjoy!

Special thanks to Google, YouTube and Powerhouse for giving us the opportunity to cover this event.