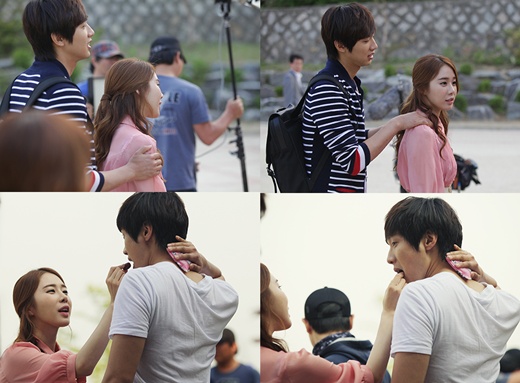 Yoo In Na and Ji Hyun Woo Looking Like a Real Couple?

Yoo In Na and Ji Hyun Woo appears like an actual couple in a photo recently uploaded by a fan.

Through the shooting of tvN‘s “Queen Inhyun’s Man,” Yoo In Na and Ji Hyun Woo have had multiple chances to share intimate feelings toward one another. In addition, many people have witnessed these two spending a lot of time together even during breaks.

At first, due to many romantic scenes in the actual drama, Yoo In Na and Ji Hyun Woo had to spend a great amount of time together to make sure they connect during the shooting. Now, they seem more than just amiable around each other. As seen in the photo, they are now close enough to give massages and feed one another.

Netizens who saw these photos commented, “You guys must be dating,” “This isn’t part of the drama right? Their actions seem so natural,” “I’m not surprised – I mean they have a lot of intimate scenes in the drama, and they have also kissed each other so it’s natural for this to happen. For some reason though, I’ve become teary-eyed after hearing this news,” “I approve,” and more.

Ji Hyun woo
Yoo In Na
Queen Inhyun's Man
How does this article make you feel?