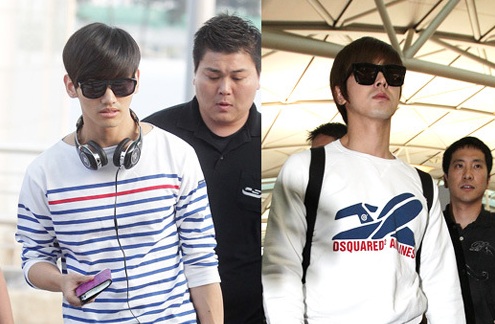 DBSK and Super Junior recently appeared as if they were participating in a small fashion battle as the members of both arrived in the airport at the same time.

Due to the recent SMTOWN concert in Anaheim, California, the airport on May 18 and 19 was filled with reporters who all had the same goal: capture the style and fashion of idol groups that are famous worldwide. Of all the idol groups from SM Entertainment, DBSK and Super Junior received the most attention.

DBSK’s members, Yunho and Changmin, are now considered to be the seniors of idol groups. Thus, it is no wonder that they always receive a lot of attention whenever they arrive at the airport.

If DBSK’s airport fashion had to be summarized in a single phrase, it would be classy with a hint of elegance mixed with the conventional fashion sense that would make a person instantly blurt out, “Yup, that’s DBSK.” If you did not catch all that, it simply means that DBSK knows how to dress to impress.

During DBSK’s recent visit to the airport, Yunho dressed up in a clean man-to-man t-shirt along with blue jeans and canvas shoes. This fashion style made him look casual and sharp at the same time.

Changmin, on the other hand, was able to show off a very fresh and cool look by wearing a striped t-shirt along with denim shorts and a matching headphone. His fashion sense, especially his denim shorts from A.P.C., made it seem like he was trying to pull off a resort look.

On the day they arrived in the airport, Lee Teuk wore a black print t-shirt along with teared blue jeans. He also carried a huge crocodile patterned bag from Nina Ricci that contained essential things for his members.

Ryeowook wore a black-collared top along with blue accessories and blue jeans to maintain a blue tone for the bottom. He also carried a rectangular shoulder bag that helped bring out his collarbone.

Super Junior
DBSK
SMTOWN
How does this article make you feel?