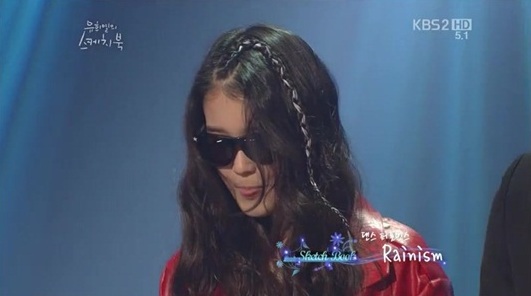 IU recently showed off her dancing skills by dancing to Rain‘s “Rainism“.

On May 25, IU appeared on KBS 2TV‘s “Yoo Hee Yeol’s Sketchbook.” On the show, she expressed her concern about her upcoming solo concert. She will be starting her official Korea tour on June 2 as she will be traveling to six major cities to perform her “Real Fantasy” concert.

In addition to expressing her worries, she put on a red leather jacket and danced to Rain’s “Rainism” – according to IU, this is supposed to be a teaser for her upcoming concert. She also told the audience that she will be revealing her hidden dance skills during the concert to make the concert more exciting. She added, “I ended up getting sore only after two rehearsals of dancing to “Rainism” because I kept getting really embarrassed about the dance.” Nonetheless, IU was able to make herself more appealing by turning a dance that’s supposed to be make one look charistmatic and sexy into a cuter dance. The part of the dance that garnered the most attention was when IU let her hand slid from her head to her stomach.

What do you think of IU dance to “Rainism”?