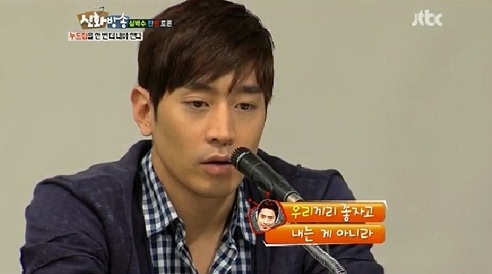 On JTBC‘s “Shinhwa Show” that aired on May 26, members of Shinhwa had a debate on an interesting yet unique topic. The topic was, “What if Shinhwa had to release another nude album?” This topic was selected, because Shinhwa was the first idol group to release a nude album eleven years ago.

After hearing this topic, Eric immediately pointed out while looking at Shin Hye Sung, “If we do end up releasing another nude album, we would only do it if we had to. I mean, why would we want to do such a thing when we have a member like Shin Hye Sung.”

After hearing all the contemptible comments by Eric, Shin Hye Sung replied, “I’m sure that if I have the right mindset I’ll be able to start exercising and building my body – in my opinion, time is the only requirement for bodybuilding and I’m quite sure we have enough time.”

Subsequently, Eric replied, “Have you ever had an idol-like body during the past fourteen years?” – after this reply, Eric pretty much turned the tables on Shin Hye Sung.

Eric
Shinhwa
Shin Hye Sung
How does this article make you feel?