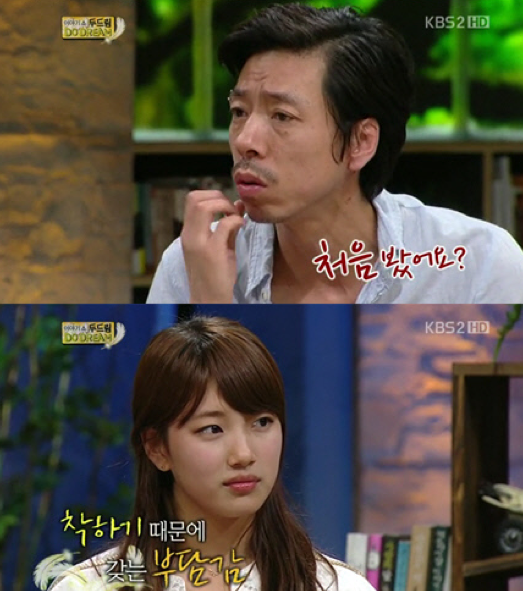 Singer Kim C has been garnering attention for admitting that he doesn’t know who miss A‘s Suzy is. On the episode of KBS 2TV‘s “Story Show Do Dream” that was aired on the evening of May 26, mentor Jang Seo Hee, Suzy, and An Sung Young guested on the show, and each spoke about their worries and concerns.

Suzy, who recently won the Rookie of the Year in Film for her role in “Architecture 101” said, “I find the spotlight burdensome when I don’t even know what acting is yet.” She continued, “From the very beginning, I was a protagonist and received the rookie award. Whenever I receive an award, I should be happy, but I’m not just happy.”

To this Kim C stated, “I don’t know who Suzy is. This is the first time I’ve seen her. From what I’ve just heard, she seems to be from the music industry who got into a girl group after a lot of hard work,” and surprised all those at the studio. He explained, “I think Suzy is a nice person. She didn’t work as hard for this area of the industry as she had for her music, and she feels bad for taking away that award from those in that industry and feels burdened. That is why she’s nice.”

Jang Seo Hee added, “I think that, as well. It’s because she’s nice that she feels that way. She knows what is right. She has the potential to improve,” and encouraged Suzy.

Suzy
Jang Seo Hee
Kim C
miss A
Story Show Do Dream
An Sung Young
How does this article make you feel?