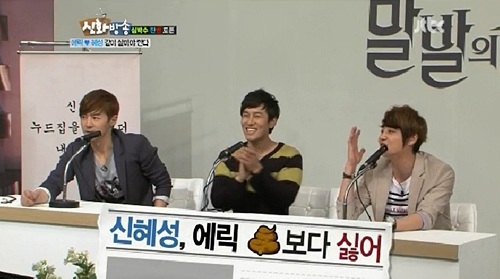 Shin Hye Sung admitted on the most recent episode of jTBC‘s “Shinhwa Broadcast” that he likes Eric more than poop.

The May 26 episode of “Shinhwa Broadcast” was “The God Of Speech” special, and the members of Shinhwa had debates. There were several debate topics, and the last was “What if Eric and Hye Sung were to live together?”

Shin Hye Sung answered, “If I say ‘poop,’ I feel like tomorrow’s headlines will be ‘Shin Hye Sung: I dislike Eric more than poop.’ So I think I’m going to go crazy. But truthfully, Eric is better than poop,” and brought laughter to the set.