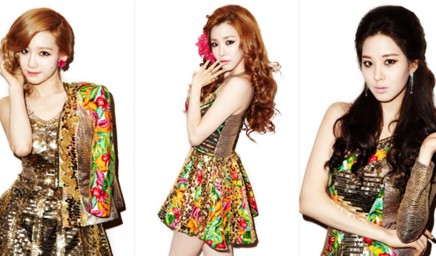 No changes in the top three this week as TaeTiSeo repeats at No. 1 with “Twinkle”. For the second straight week, “Twinkle” swept all music shows and also ranks high near every online chart. Despite a slight drop in points from last week, “Twinkle” has distanced itself from the No. 2 song, Sistar’s former chart topping hit “Alone.” Even though a lot of new songs will challenge, “Twinkle” has a good chance to remain on top for another week. Park Jin Young’s “You’re The One” remains at No. 3 this week.

There are four new songs in the top 10 this week. At No. 4 is sophomore girl group A Pink’s “Hush.” Coming from their first full album, the song moved up 12 spots this week. “Hush” was co-produced by Rado and Hyu-you. Just one listen and listeners are expected to fall in love with the girls’ cuteness. The girls’ charming vocals and the song’s refreshing melody are keys to this song. The song is about overcoming your fears about confessing your love for someone.

At No. 5, Superstar K3 winner Ulala Session finally releases their first mini-album. The title song “Beautiful Night” is a retro style 80s dance hit inspired by the movie “Footloose.” With the help of Psy, this song becomes a fun song to listen to and it is like an early present for summer. This week “Beautiful Night” moves up 13 spots to No. 5.

At No. 6, hip-hop duo Mighty Mouth is back with a digital single “Bad Guy.” It was composed by Rhymer who was also responsible for writing the duo’s hit track, “Toc Toc.” This exciting rap number is expected to make listeners get up and dance to the beat. Soya once again lends her vocals to this exciting number. It moves up nine spots to No. 6 this week.

At No. 8, perhaps the song with the best potential to be our next No. 1 song, is IU’s latest hit “Every End Of The Day”. This is the title song from IU’s latest single album. Last week, IU’s self written preview song “Peach” made a cameo appearance in the top 10. As expected, it is replaced by the title song this week. “Every End Of The Day” is co-written by hitmakers Park Geun Tae and Kim Do Hoon, lyrics by Kim Ina. It is an upbeat pop number. Fans can hear the bright vocals IU has already received much love for.

Album: Storm Heart digital single “Hope It’s The Last Time”
Comment: Storm Heart releases her third single album, “Hope It’s the Last Time” this month. It is a modern rock number with electronic guitar and string sounds. The song holds lyrics about wanting to start again with an ex-lover even if it means getting hurt from this thought. (credits to motoway065 for translations)