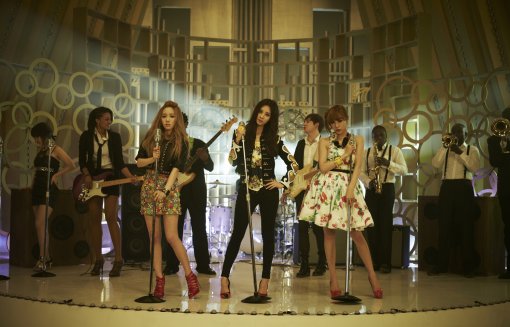 Last week, Shin Bora of the Brave Bastards made a playful diss on TaeTiSeo’s group name during KBS “Gag Concert.” She called the name “childish” and “old-fashioned,” poking fun at the way TaeTiSeo sounded.

But as a huge fan of TaeTiSeo, I felt extremely upset watching Shin Bora’s skit. I couldn’t help but keep thinking – “Is she for real?!” First of all, TaeTiSeo is a pretty cool name. It has some catchy elements and creativity behind it. It’s probably not the best name, but certainly not something that should be blamed for being “childish.” But more than anything, my main problem was – we’ve seen worse names in the past.

In this article, we will go over the top seven K-Pop groups with the most “childish” names. Hopefully, this will help fans appreciate TaeTiSeo’s name a little bit more and make them realize how pretty their name is after all! (Please let us know if you disagree with this list!)

MBLAQ is an acronym for “Music Boys Live in Absolute Quality.” Created by the singer/actor Rain, MBLAQ debuted in 2009 and has enjoyed a successful career so far. Their music, boys, and live definitely come in “absolute quality,” but we’re not so sure about the quality of their name!

Formed under JYP Entertainment, g.o.d was one of the most popular idol groups in the late 90s to early 2000s. g.o.d stands for “Groove Over Dose,” but contrary to its meaning, their music was more focused on soft ballads and light dance tracks. Not only that, “overdose” should be a single word, not two separate words, so their name should have been “g.o.”

H.O.T is SM Entertainment’s first major idol group to hit the mainstream audience. Formed in 1996, H.O.T is widely credited for turning K-Pop into music for teenagers and the younger generation, fitting what their name stands for – “High-five of Teenagers.” Their legacy will always be remembered as bringing change to the overall music scene in Korea, but their awkward name will always be the running joke of old-school K-Pop fans.

LEDApple has several meanings behind it. “LED” is supposed to represent the group’s inspiration, Led Zeppelin, and their dreams of leaving a big mark on the Korean music scene one day. “LED” also stands for “LED lights,” and how LEDApple shines brightly on stage. The “Apple” part is supposed to symbolize the group’s freshness and sweetness as an idol group. We love the boys, but maybe they’re trying a bit too hard?

SM Entertainment’s first rock band TRAX is supposed to mean “recording tracks.” But its double meaning is “Typhoon of the Rose Attack on X-Mas,” representing each member of the group (Typhoon, X-Mas, Rose, Attack). Does this even make sense?!

Fin.K.L formed a fierce rivalry with SM Entertainment’s girl group S.E.S in the late 90s, and produced some of the top female stars such as Lee Hyori and Sung Yuri. However, as well-defined as their music was, their name lacked a clear meaning. It’s supposed to stand for “Fin Killing Liberty” (fin means “ending” in French), and their opposition to “the oppression of all freedom.” Very philosophical!

Not a lot of fans are aware of this group that debuted in 2011. They appeared in a few music shows, but never made it big in the industry, and it looks like New F.O’s short-lived career will soon fade into obscurity.

One thing that will be remembered, however, is their group name. New F.O apparently stands for “New Five Order.” Not sure what type of order they were talking about, but at least they accomplished one thing – Topping the Soompi list for the worst K-Pop group name of all time! Congratulations!