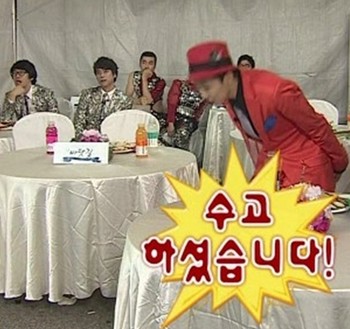 Pictures of G-Dragon’s “folder” bow were recently uploaded to an online blog.

In the collected images that were posted, G-Dragon is seen bowing at 90 degrees – like a folder being folded. Compared to the other members’ bows, G-Dragon’s bow stands out because of his perfect 90 degree stance.

In the collage of photos, G-Dragon is seen doing the same “folder” bow at TV appearances, to his sunbaes (seniors), to the audience and even to his hoobaes (juniors). Many commented that his bow shows his great etiquette.

Netizens who viewed the images of G-Dragon’s “folder bow” commented, “He came off as being rough and strong, but it’s good to see him with such great manners,” “Not only do celebrities need to learn from him, but also the general public,” and, “Every time I saw him on a show, I noticed that he bowed with etiquette.”