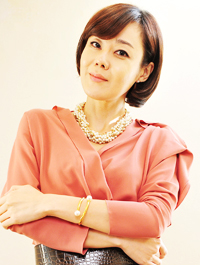 How do you feel about your visit to the Cannes Film Festival?

Please tell me about your new role in the new ABC series “Mistresses.”

We already finished filming the first episode and we are planning on resuming in July. My character in “Mistresses” is a psychiatrist who falls in love with a patient. The patient faces death later on and my character falls in love with the patient’s son. Even though this will be aired on ABC, I have a lot of love scenes and the plot of the drama is also very unique.

Have you ever wanted to be part of any of the awarded movies in the Cannes Film Festival?

I’m really jealous about the fact that a lof the actors and actresses in the Cannes Film Festival have the chance to go up on the stage with the director in the end. I’m always willing to be part of a film that has a good plot. Since I’m a commercial actor though, I think I will be obligated to a lot of responsibilites once I get cast into such a film.

It seems like you admire L’Oreal Paris’s slogan, “Because you are worth it.” – Why is that?

I immigrated to the U.S. when I was really young and this slogan really helped me get on track with my life. This slogan was first released to the public in 1970 by various models – when I first heard the slogan, I realized that in order become someone who’s worth something in this world, I’ll need to work hard. Who would have known I would become a model that I always looked up to back then?

Please tell me about your role in the Korean film “Neighbors.”

This movie is actually based on a comic series. My character is a married woman who has two daughters. The main plot is based on the murder case of the woman’s two daughters. If you want a good cry, I highly recommend this movie.

Has anything changed after your role in “Lost”?

In American scripts there is always a number next to each character such as Character 1, Character 2, etc. The number descends from the most important role down to the least important – I was number six in “Lost”. Now in “Mistresses” I’m number two. Also in “Lost”, many American people couldn’t pronounce my name correctly. Now, they somehow learned how to say it correctly.