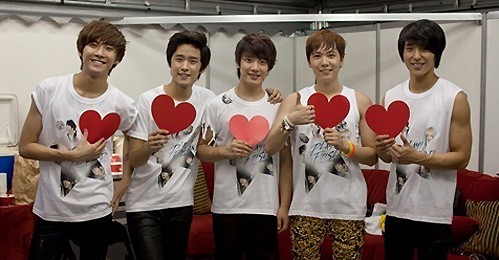 FT Island eventually shed tears in Taiwan because of the loud cheers from over 8,000 fans. On May 26, they had a meaningful time with their fans at their concert titled, “Play! FT Island,” which set a record by selling out in ten minutes after ticketing was opened.

On this day, FT Island heated up the place by singing 20 songs like their hit singles“Confession,” “Neverland,” “Love Love Love,” and “I Hope.” While singing “Confession,” Lee Hong Ki got teary-eyed because of the surprise event done by the fans. As the song started to play, the fans made a magnificent sight to see by making a sea of red with paper hearts held up high in their hands. The hearts were prepared before the concert. Also, the fans moved FT Island once more with a group placard that congratulated the 5 year anniversary of FT Island’s debut, which is coming up soon on June 7.

Surprised by their fans, FT Island said, “We are so thankful for the love of our fans in Taiwan. Also, the surprising event was very touching. We are always pledging to work harder in order to repay the love of our fans. We are so happy because we received a lot of love at this concert as well.”

FTISLAND
Play! FT Island
Confession
How does this article make you feel?