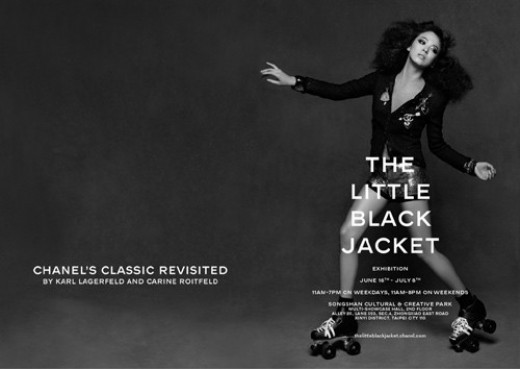 Photos that will be featured in Chanel’s worldwide photo exhibition were recently released. Karl Lagerfeld, the fashion house’s creative director, hand-picked Song Hye Gyo’s photo to be a part of the photo exhibition, bringing much positive attention to the actress.

Song Hye Gyo was the only model to be chosen from Korea. At Karl Lagerfeld’s request, Song Hye Gyo was given the opportunity to participate in this world-wide exhibition. In October of last year, at a fashion show in Paris, Lagerfeld suggested that the actress work together with him and his team on this project.

The concept is avant-garde, with Song Hye Gyo wearing a black jacket and shorts, and gliding on roller skates. There is a very magical element to the picture, and Lagerfeld has perfectly captured Song Hye Gyo’s beauty.

The expression on her face is blank, but her gaze is mysterious – particularly amplified by her sexy smoky eye make-up.

There are also plans for the photo of Song Hye Gyo to be published in Vogue. In addition, the actress is the only Korean celebrity and only Asian actress/model to be signed by the Paris-based global agency, Effigies.

The photo exhibition is set to open on June 16 in Taiwan.