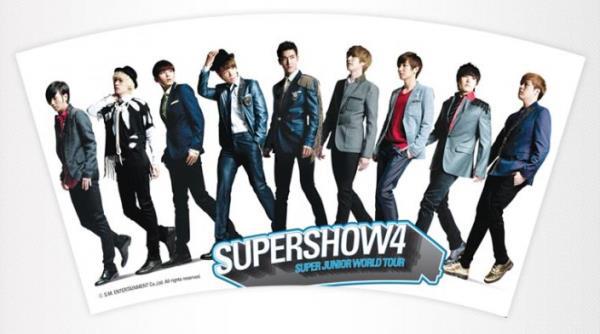 “To add or to end?” That is the question Super Junior is considering at the moment. After completing the Seoul encore concerts of the “Super Show 4 World Tour” on the past weekend, local news agencies report that the group is mulling the extension of their rousingly successful concert series.

The world tour kicked off in Seoul in mid-November 2011, then went on to Japan, Taiwan, Singapore, Macau, Thailand, France, China and Indonesia. Super Junior held 24 performances in 10 cities, reaching an estimated 400,000 audience. The Seoul encore concerts were reported to have received an overwhelmingly enthusiastic response, befitting a finale to the series.

However, requests from other cities in China,Malaysia and some other Asian countries have continued to pour in.

Representatives of Super Junior’s management, though, are very cautious about fanning the flames of a possible extension. One official is quoted as saying, “Super Junior members are finally home after six months of touring. They are scheduled to begin work with recording and activities on the new album. Their last release was the fifth album, ‘Mr. Simple’ in August 2011. With a six-month touring schedule, Super Junior members need to give their bodies time to heal. Not only that, their new record has been delayed too long and for the meantime, we intend to concentrate on that.”

In addition, he said, “Super Junior achieved successes with ‘Sorry Sorry,’ ‘Bonamana,’ and ‘Mr. Simple,’ three mega-hits in succession. It is also important for us to entertain the audiences at home and keep Super Junior visible in the domestic market.”

Still, the clamor for additional concert dates for “Super Show 4” has continued all over Asia, and the pleasant dilemma that faces Super Junior interests a lot of industry watchers, entertainment buffs and fans alike.

Super Junior
Super Show 4 World Tour
How does this article make you feel?