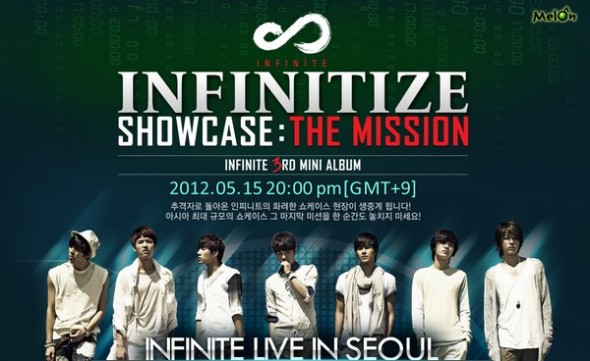 Recently, Infinite has conducted a showcase where they visited five cities throughout Korea. The DVD entitled, “The Mission” is made up of these performances. “The Mission” is scheduled to be released in Japan as a limited edition.

A few weeks ago, Infinite released their third mini-album, “Infinitize.” To celebrate the release the members took to a helicopter and traveled to Gwangju, Busan, Daegu, Daejeon, and Seoul for their showcase “The Mission.”

The DVD version will consist of three chapters. The showcase will include performances of their comeback single, “The Chaser” along with all their previous hits. As a special bonus Infinite’s talk show appearances, going back stage with the band, interviews with members, rehearsal videos, and making of videos will be available in the DVD for fans to enjoy. In total there is over 12 hours of content. Including a collection of photos for each member was carefully selected to display their personalities.

The interest surrounding the DVD is extremely high. This special collection was created with the fans in mind. Even the members are excited to show their devoted fans the group’s performances in this manner. “The Mission” is expected to be released on July 11 in Japan.

INFINITE
Japan
INFINITIZE
showcase
the Mission
DVD
How does this article make you feel?