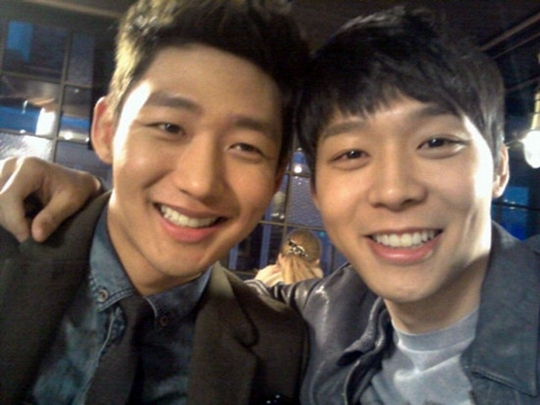 A recent photo of Park Yoochun fast asleep has been revealed.

On May 30, Park Yoochun posted on his Twitter, “Taesung hyung, Minsoo hyung~ We had such a good time~ A passed out Yoochun, a mental breakdown Yoochun~ Is this what our relationship is about?” along with a photo.

In the photo, Park Yoo Chun looks like he is passed out in a deep sleep. Lee Tae Sung (who appeared on “Rooftop Prince” with Park Yoochun) is seen sticking his tongue out with half-opened eyes, which drew much laughter.

After Park Yoo Chun posted that photo, Lee Tae Sung replied, “Hey Yoochun. That was shot from far away. I was at least 20cm apart from you. I just wanted to protect you, and you were passed out.”

Then Park Yoo Chun replied to him by saying, “Hmm~ Hyung, protect me,” and to that, Lee Tae Sung answered, “From now on, I will protect you whenever you pass out~ Don’t worry Yong Tae Moo. Hahahaha”

This playful conversation drew much attention from the netizens who reacted, “Lee Tae Sung is so protective over Park Yoo Chun’s passed out state,” “The two of them seem so close,” “This is so funny,” and many more.

Meanwhile, the SBS drama, “Rooftop Prince,” in which Park Yoo Chun and Lee Tae Sung co-starred came to an end on May 24.