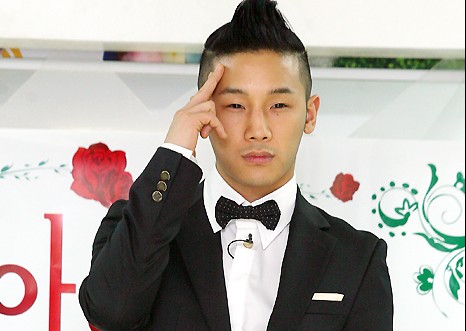 Mighty Mouth’s Shorry J has recently been put under the fire for making silly faes during Girls’ Generation TaeTiSeo’s thank you speech on a music program. Shorry J appeared on “Park Myung Soo’s Moving TV” on May 30 and expressed, “I was deeply hurt,” after this whole incident happened.

He continued, “It was my first time seeing all those negative comments about me. I’m pretty deeply hurt. I think it’s because I got slammed on for trying to be funny.”

Shorry’s teammate Sang Chu said, “At first, Shorry goofed around for only about five seconds and then stood next to me quietly. I told him that it was funny and pushed him to do more. Then Shorry continued to make those faces and it became a big issue.”

On May 25, TaeTiSeo won the Mutizen Song award for “Twinkle” on “Music Bank.” While they were giving their acceptance speech, Shorry was making goofy faces behind TaeTiSeo, which caused fans to criticize him. Shorry did this again on the previous day on May 24 during M.net‘s “M Countdown” during TaeTiSeo’s speech. He left a Twitter message on May 26 saying, “Girls’ Generation fans, I had no intention of being distracting so I’m so sorry if you didn’t like what I did. I won’t do it anymore, please don’t be mad~”

Mighty Mouth
Shorry J
TaeTiSeo
How does this article make you feel?