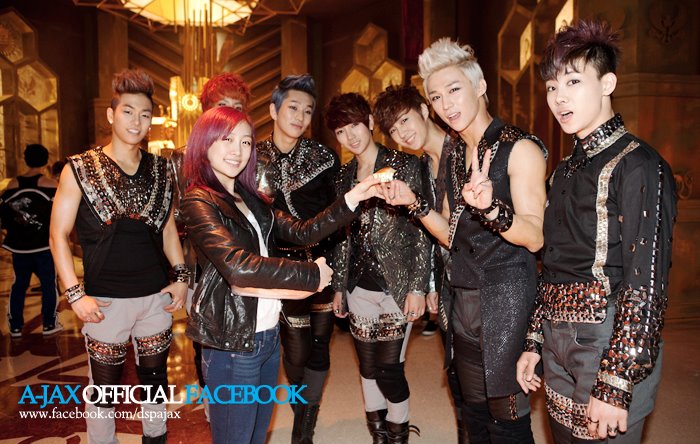 Kara‘s Nicole made a surprise visit to the set of the music video for the new and powerful group A-JAX, who are Nicole’s junior in the same agency. On May 30, a proof shot was revealed on A-JAX’s official Facebook of the members and Nicole together.

On this day, Nicole created a nice atmosphere on the set by giving A-JAX members and the set staff black tea and muffins that she made herself. As soon as she returned to Korea after completing her busy schedule in Japan, she visited A-JAX’s set and stayed to continuously cheer them on. Additionally, she fulfilled her role as a senior by giving much advice on their dancing and the way they looked into the camera.

A-JAX members expressed their thankfulness by saying, “Senior Nicole’s support gives us much strength. We will work hard in order to become a group that receives love from everybody, just like KARA.”

Meanwhile, A-JAX will be having their official debut on June 2, with their title song, “One 4 U.” The music video for the song was released today.

KARA
Nicole
A-JAX
One 4 U
How does this article make you feel?