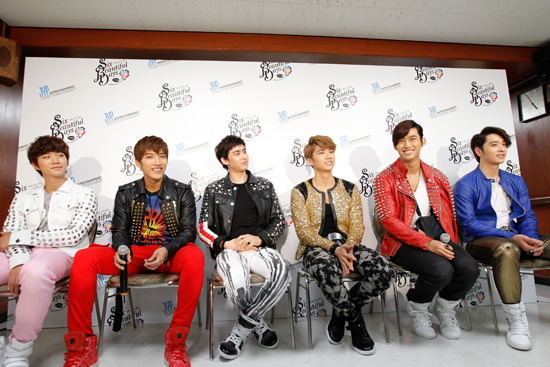 In Budokan of Japan 2PM will be holding a 6 day straight concert, which is a first among Korean singers. However, 2PM’s Taecyeon fractured his arm while wrestling! He even had to insert in metal pins!

Taecyeon stated, “While arm wrestling with 2PM members I fractured my left arm. I am sorry because I won’t be able to show my best during our performance.”

While having a cast Taecyeon explained that he had surgery, inserted the metal pins and would have to rest for “One to two months.”

He continued, “A lot of people don’t believe that I fractured my arm because of arm wrestling. But, it really was that. There is a saying that people with a lot of muscles should not arm wrestle. My diagnosis was that while arm wrestling the biceps and triceps suddenly expanded and pressed against the bone breaking it. While we were having fun arm wrestling, we suddenly heard a popping noise as the bone broke. The problem is all these muscles. I think I am going to have to cut down on working out now.”

Also Taecyeon talked about the upcoming Budokan concert, “When I came in as a trainee into JYP I was so envious of Rain when I heard that he was having a concert at Budokan” and “Although I won’t be able to show you my best performance, I will still try my best.”

2PM
KPLG
How does this article make you feel?