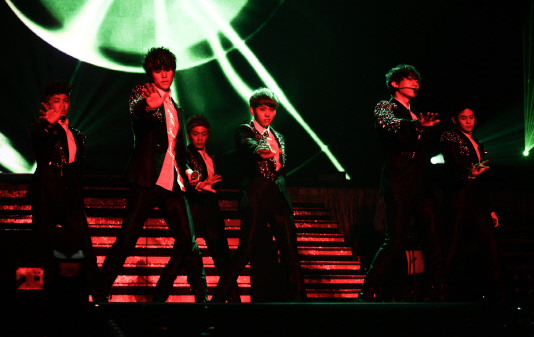 Beast fans have recently started a movement obtaining signatures demanding an apology from KBS2 for cutting out the group’s performances on the air.

On May 12, at the ending of the first part of “2012 I Love You, Korea Dream Concert,” Beast performed hit songs “Fiction” and “Shock.” However, when the concert was aired on May 30, “Shock” was completely cut out, and only half of “Fiction” was aired. To this, member Yoseob tweeted, “Hehe Sometimes things like this and that happen! Don’t get too upset! Then you won’t be able to sleep. Beauties go to bed!” and comforted the fans. However, fans have initiated a movement to obtain 50,000 signatures on the Daum agora.

The fans write, “This is an incident that occurred at the ‘2012 I Love you, Korea Dream Concert.’ All the artists sang their greatest hits, at most two, at least one song. However, when Beast was performing ‘Fiction’ between the first and second half of the concert, the performance was edited to go straight to the introduction of the second verse. Then a commercial was aired, and that’s how it ended. Those who were at the event say that Beast performed two songs. However, one song was cut in the middle and the other was completely left out. Not only those of the Beast fandom, but if there are fans of other artists who would feel that KBS2 should sincerely apologize if the same happened to their favorite artists, we would be grateful if you signed this petition.”

Currently, there are about 8,200 signatures. Below is the clip of what was aired of “Fiction.”