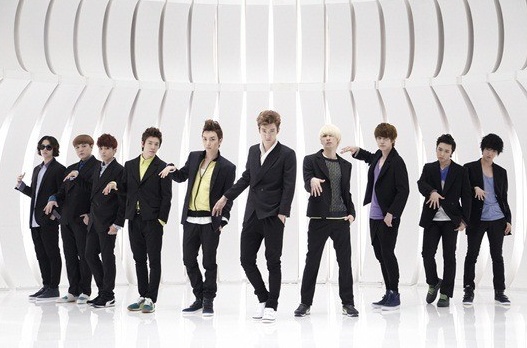 Super Junior Gets into Fist Fights with Each Other

On the most recent episode of SBS “Strong Heart,” Secret‘s Sunhwa confessed in tears that she had felt left out by fellow members from time to time. Upon Sunhwa’s confession, Super Junior‘s Lee Teuk started talking about teamwork among idol groups. He said, “Sometimes, members of idol groups get into arguments and fights due to misunderstandings. We have gotten into fist fights. There’s been a time when we got into arguments during meals and just flipped the dinner table out of frustration and anger.”

Lee Teuk then started talking about the most recent fight the members of Super Junior had. He explained, “Recently, we got into an argument after winning the ‘Mutizen Song’ from SBS ‘Inkigayo.’ We had to go film KBS ‘Let’s Go! Dream Team‘ after ‘Inkigayo,’ so we were headed to the filming set. On our way there, we didn’t talk to each other and some of us even took a separate car to get there.”

Eun Hyuk added, “When we got there, we couldn’t work as a team. Everyone was eliminated in the beginning. I was the last person to run the obstacle course and when I won the first place, I thought about my Super Junior members and started tearing up. They were all I could think of.” Eun Kyuk admitted that this experience brought him and the rest of Super Junior closer together.

Lee Teuk concluded with a little tip for all the other idol groups to remain together and thrive for success together, “To be honest, I can be a little harsh on my members. But my belief is that, no one should keep their concerns and complaints to themselves in a team. Everyone has to be able to talk about their inner most feelings to keep a team together.”