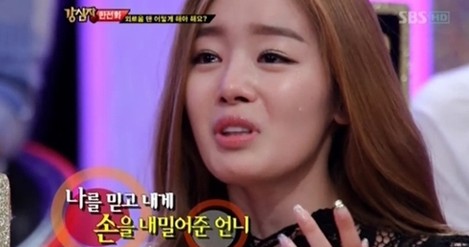 Secret’s Sunhwa Sheds Tears: “I Felt Alienated From the Other Members”

Secret’s Han Sunhwa shed tears during the recent episode of “Strong Heart” that aired on June 5. She confessed that in the past, she felt alienated from her other Secret members.

She shared, “I’m usually bright and forward so even when I meet someone new, I approach them first. But that somehow made me seem like a player.”

Sunhwa continued, “I couldn’t share this with my members even more. I thought it would sound like shameless complaints to them,” and “When we first debuted, I alone thought that I was being alienated by my members and I was very lonely. I even thought about going to a mental hospital.”

Sunhwa revealed that she had to execute various variety program schedules all week and did not get to spend much time with her group members. Thus, the other three members got to make memories on their own without her, which was why she felt left out.

However Sunhwa finished by saying, “During a practice session, I suddenly began to cry and that was how the misunderstanding was lifted between me and my members. We were able to overcome those struggles,” displaying the tight friendship of the Secret members.

Secret
Strong Heart
Sunhwa
KPLG
How does this article make you feel?