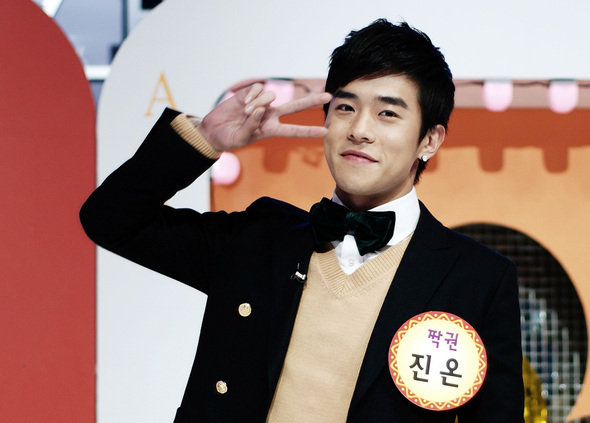 F.Cuz’s Jin On Reveals Luxury Abs and No Makeup Face

On June 5, the first episode of “Idol TV F.Cuz” aired featuring F.Cuz members as emcees of the show.

Based on the votes submitted by viewers, a member was selected to reveal their makeup-less face. The member who came in first with the greatest number of votes was none other than F.Cuz leader Jin On.

Jin On hastily explained, “Makeup, especially eyeliner, can make all the difference in how an idol carries himself. An idol without eyeliner is like a bowl of ramen without soup.” The other members however, didn’t appear too concerned about his embarrassment and began to erase Jin On’s makeup. To the disappointment of gleeful fans, the only apparent difference they could see was the stubble of his beard now showing without foundation.

Jin On also showed off his luxury abs by announcing, “We told you before that F.Cuz would reveal their abs, so today I will be showing you mine” to the delight of the fans. The other members jokingly prodded Jin On, “So did you remember to bring your abs with you today?” The fans responded for him as their screams filled the whole studio.

F.CUZ
makeup
KPLG
Idol TV
How does this article make you feel?