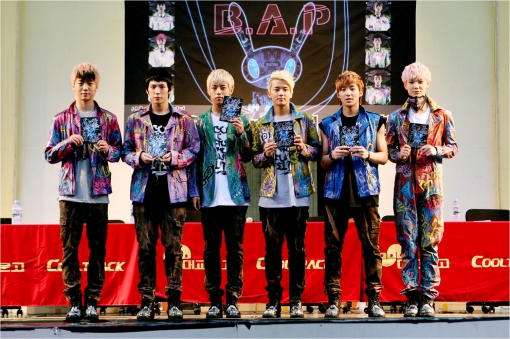 B.A.P to Embark on Asian Showcase

B.A.P is setting off on an Asian showcase tour just five months after their debut. The band finished up their promotional activity for “Power” with an encore fan signing at the I’Park Mall in Yongsan, Seoul, yesterday. Starting from July, they will be on a showcase tour around Macao, Malaysia, Thailand, and Taiwan.

The band previously announced that they will be performing with Girls’ Generation and SHINee on July 2 at the Macao Venetian Hotel’s Cotai Arena. Following the concert, B.A.P plans to be in Malaysia on July 6, Thailand on July 8, and in Taiwan on September 22.

According to B.A.P’s agency, TS Entertainment, the group has an avid following abroad, following their showcase in front of three thousand fans at Seoul’s Jangchung Gymnasium, and joint Singapore fan meeting in March with Secret.

The agency stated, “Shortly after their debut, B.A.P has been getting continued love calls from not only Asia, but also from North America, South America, and Europe,” and “As this is the year of B.A.P’s debut, we will be focusing on raising awareness for B.A.P domestically, and in the Asian region.”