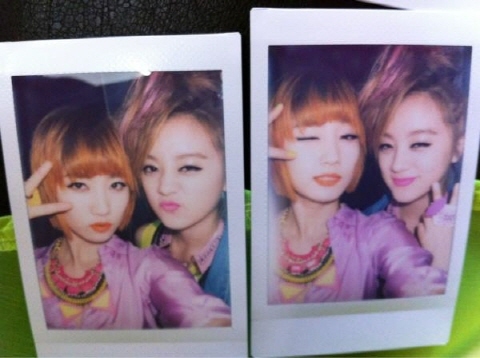 In the polaroid picture both Lim and Yenny put on silly and cute expressions immediately after coming off stage for their performance, as they received many compliments from netizens for their adorable and lively make-up and attire.

What’s especially eye-catching about this photo is Lim’s striking similarity to 2NE1‘s Dara.

The photo received many compliments from netizens such as “The two of you look so pretty”, “You two are simply the essence of young beauty”, “I love your new track!” and many more positive comments.

For the past three days the Wonder Girls have been busy promoting the title track “Like this” from their minialbum “Wonder Party”, which has been climbing all music ranking chart sites – demonstrating how their popularity hasn’t waned a bit over the years since their debut.

Wonder Girls
Yenny
KPLG
Lim
How does this article make you feel?