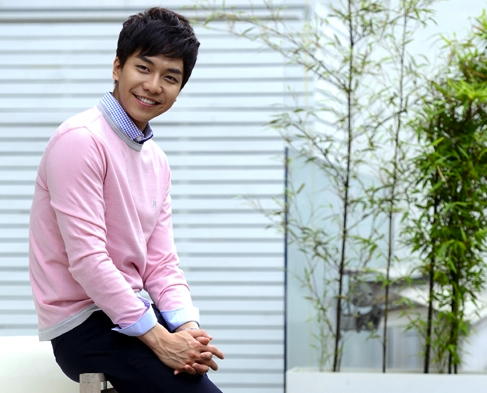 Lee Seung Gi: “I’m Looking for a Happy Ending in My Life”

Lee Seung Gi is the guy who has everything, who has won the triple crown in the show-business industry, transcending the boundaries of music, acting, and show-hosting. Singer, actor, and MC, Lee Seung Gi worked hard to earn each and every title of his. The prince of showbiz world became even more ambitious than he already was before when he set his eyes on MBC “King 2Hearts.” When he decided to star in the show, he resigned from SBS “Strong Heart,” saying that he wants to solely focus on his acting.

As everyone had expected, Lee Seung Gi’s “King 2Hearts” soon became the most watched TV drama on Wednesday and Thursday nights. However, many fans and viewers soon became less interested in “King 2Hearts” due to the show’s excessive use of PPL (Product Placement) advertising. By the time “King 2Hearts” ended, it earned two rather dishonorable titles: the least watched TV drama on Wednesday and Thursday nights and “Dunkin 2Hearts,” as the advertisement of the sponsoring company sometimes interfered with the flow of the drama.

Lee Seung Gi commented, “The ratings started to go down visibly. I didn’t think it was possible to drop that much at a time. I usually pay a lot of attention to ratings. How can you not? I’ve had experiences where a drama starts out with rather disappointing ratings when it first starts and then slowly gain more viewership as time goes by, but never seen a huge drop like it happened with ‘King 2Hearts.’ However, I was still relatively stress-free, to the point where I felt sorry for the people around me. For a moment, I wondered if I lacked a sense of responsibility, but the ratings are not something I can control.”

The huge drop in viewership taught Lee Seung Gi a valuable lesson. Lee Seung Gi realized that an actor should never be affected by ratings. He thought that once he starts to become too conscious about ratings, he would lose himself with all the preoccupations. Although he became exhausted mentally and physically after four months of filming and did not win the prize of the highest viewing ratings, he did improve himself as an actor and proved his abilities as the leading actor in a TV drama.

Frankly speaking, almost nobody expected Lee Seung Gi to shine in “King 2Hearts.” The main plot of “King 2Hearts” portrays how immature prince Lee Jae Ha (played by Lee Seung Gi) of South Korea falls in love with North Korean Special Forces instructor Kim Hang Ah (played by Ha Ji Won), becomes the king and saves Korea from terrorist crises. The plot in itself is so rich with all the background information about North and South Korean relationship and other political issues that the main actors and actresses could have easily lost their presence in the story. However, Lee Seung Gi led this rather complicated story all on his own, fully deserving the title “Actor Lee Seung Gi.”

In “King 2Hearts,” Lee Seung Gi played the role of the king of South Korea. However, he was not the typical king. In the earlier episodes of the show, Lee Seung Gi’s character Lee Jae Ha was rude and self-centered, especially towards his fiance Kim Hang Ah. Looking back at his character, Lee Seung Gi stated, “Even I thought Lee Jae Ha was provocative and rude. At first, I hesitated to portray him like that because I was worried that it might be ‘too much.’ However, I soon realized that I had to stick to the character to make it seem real and believable. I kept reminding myself not to be alarmed by momentary hesitations.”

“King 2Hearts” ended with King Lee Jae Ha and Queen Kim Hang Ah saving both North and South Korea from war and living happily ever after. The chemistry between Lee Seung Gi and co-star Ha Ji Won, who is nine years his senior, was unbelievably great and many fans and viewers wished that “Jae-Ah couple (referring to Lee Seung Gi and Ha Ji Won’s characters)” would start dating in real life. Although real-life “Jae-Ah couple” did not happen, Lee Seung Gi told that he really did love Ha Ji Won in one way or another.

He said, “I did love Ha Ji Won’s Kim Hang Ah. But if I really fell for Ha Ji Won, I probably wouldn’t have been able to do my job. Since the drama had its happy ending, I should start looking for a happy ending in my real life. I realize that love doesn’t just come to you. I’ve had people I was interested in, but never had the guts to approach them. Nobody would ask for my phone number, so I even thought that I was just unattractive. Everyone should be actively looking and trying for love. I’ve been told that I should keep my relationship a secret when it happens by my colleagues. Apparently, things could get really hard for both me and my loved one.”