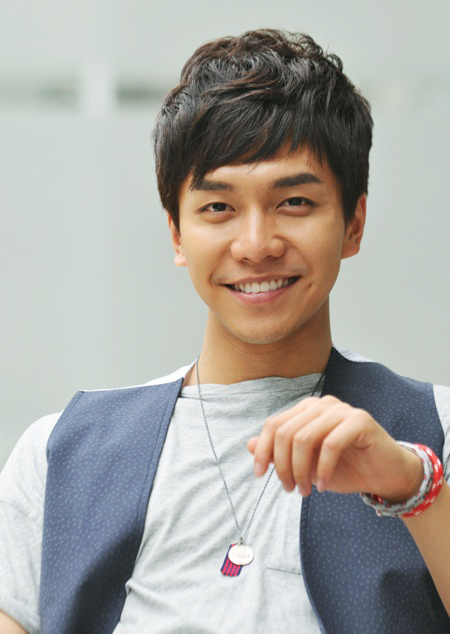 During his interview with enews, Lee Seung Gi was still reeling from his experience of working with Ha Ji Won on the MBC drama series, “The King 2 Hearts” even after it was over, “While working on this project I was able to fulfill two of my wishes. Actress Ha Ji Won is truly amazing. She is capable of bring in millions of audience members with her movie and her dramas become popular. She is one of the few actors who are able to crossover. She is a very nice person and professional to work with.”

He had definitely caught Ha Ji Won fever as he went as far as to change his ideal type from Girls’ Generations Yoona to Ha Ji Won.

“She remains pure and innocent even though she has more experience than I do. She doesn’t analyze things so each take is a surprise making it fun working with her. Isn’t a woman who is talented and very sweet the ideal type for all men? That is what has brought me to change my ideal type.”

Since he had brought up the subject the topic of his ideal type was explored further. It was interesting to hear his perspective on women. Lee Seung Gi did not hesitate in giving his honest opinions.

“I tend to be the kind who falls in love at first sight. My style isn’t to gauge someone at first and then take a liking to them. Appearance is clearly important to me,” Lee Seung Gi said with a laugh. “My standards are that she must be pretty. Though most people I feel are attractive will agree that they are beautiful.”

Even though he was quick to open up about his ideal type as well as relationship status, surprisingly Lee Seung Gi, has not been caught in a real scandal. Maybe it is his responsible and well-mannered image that protects him. Yet, he still has suffered from rumors just like any other celebrity. Hurtful rumors about his family, relationships, and anything in between have been spread by word of mouth and the internet.

“The amount of rumors regarding me on the internet is not a laughing matter. There are quite a few so embarrassing I am unable to speak about them myself. It is similar to that saying, ‘Smoke without a fire.’ From time to time, people create their own fires, for their own entertainment. I can understand the rumors about a celebrity’s romantic relationship because, honestly, I even am curious about that.”

“It seems since our job is to put on a smile no matter what, biased people make claims that someone is 100 percent dating someone else because of it. It is not a simple matter for one person to meet-up and break-up with another. There is a higher probability that all these rumors about celebrities are spread by the public, they are more likely to be false then to be the truth.”

Many of the speculations and rumors that are being spread have been collected in the “Entertainer’s X-Files.” The information in the collection might not be true, but it still has an immense impact on the celebrity’s images which may make it impossible for the star to recover. Not long ago, Kang Ho Dong was suspected of tax evasion and ended up taking a temporary leave from the industry. Lee Seung Gi looked up to Kang Ho Dong as a senior who he relied on and believed.

“I might be called bias for sticking up for my fellow artists, but there are so many instances that are so cruel and sad. A little story shared over drinks can instantly turn into a public issue. Celebrities in society are weak and do nothing but suffer the consequences because of it. If the stories are true, then so be it, but there is so much false information being transmitted, all one can do is feel pity.”