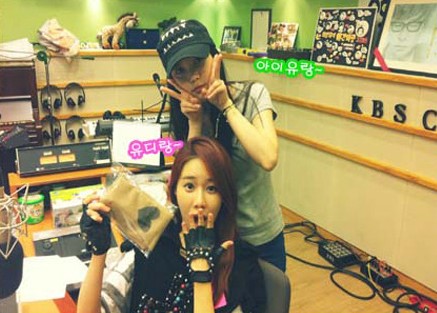 On June 11, during KBS radio show “Yoo In Na’s Raise the Volume,” Yoo In Na suddenly screamed “Oh my goodness, you surprised me!” She was startled because IU entered the radio booth without a warning. Yoo In Na kept asking, “What is going on? You really got me.” IU said, “I came here in a cab. My managers will flip out if they hear this right now,” confessing that this was an ambush visit she planned and executed all by herself.

IU commented, “The security here at KBS is really strict. I took my hat off in front of the security guard to show him that I’m IU, but he didn’t recognize me without makeup. He asked me what I’m here for, so I told him, ‘I’m IU.’ The guard seemed confused.” Yoo In Na could not help but to start laughing at IU’s story.

On this episode of “Yoo In Na’s Raise the Volume,” IU brought a special gift for Yoo In Na for her birthday, which was on June 5. Yoo In Na seemed a little bit embarrassed when she opened the present, which was a sexy outfit. IU kept nagging Yoo In Na to wear the outfit and Yoo In Na promised her and the audience that she will wear this outfit for the next viewable radio session.

Since IU’s visit to “Yoo In Na’s Raise the Volume” was not previously scheduled with the staffs, IU was going to participate in the show for only about 10 minutes. IU did not even tell her own managers and agency, so she had a mini shout out to her agency saying, “Please don’t get mad at me.” Yoo In Na also defended IU, “Let’s just pretend like this didn’t happen today. It’s a secret among us, no one else has to know that IU is here.”

However, contrary to her initial concerns about getting in trouble, IU ended up staying at the radio booth, co-hosting the show with Yoo In Na for about an hour. Yoo In Na seemed happy with this new temporary arrangement, too. She read the stories submitted by listeners in more excited voice than usual.

IU
Yoo In Na
KPLG
Yoo In Na's Raise the Volume
How does this article make you feel?