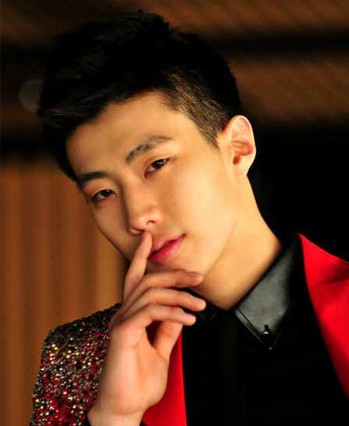 Jay Park recently completed a photo shoot for clothing brand Googims which portrayed Jay in a cute light. The singer took on the challenge and the photos that resulted were of exceptional quality.

Today, this mysterious photo surfaced online displaying a rather interesting concept. Within no time it caught the attention of the public and fans alike. The image had a completely different feel and quality to it than the Googims photo shoot.

In the photo Jay was pictured wearing a sheer white sleeveless shirt as he sat posing on a bench. The shirt he wore was made of a fish net material which allowed his skin to be seen through it. He gradually was ripping the sleeveless shirt which further displayed his solid chest and abdominal muscles. Some commented that he has the face of a boy and the body of a beast.

The photo indeed caught the attention of netizens who had much to say about it, “After seeing that picture my heart is getting torn ripped apart,” “He is one fantastic all-around idol,” “My heart skipped a beat,” and “It appears he has gotten a lot more tattoos.”

Not long ago, Jay Park completed his first US tour which began in Washington, D.C. on May 18. The four city concert was a complete success as he sold out each location and even held two additional fan meetings to cater to those fans unable to purchase tickets.