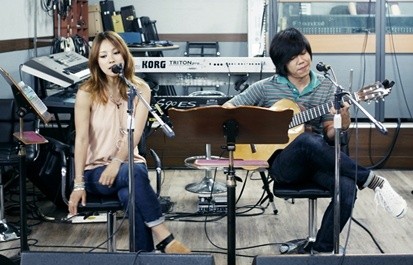 The upcoming episode of OnStyle “Golden 12” will portray Lee Hyori and her social club members preparing for “Loving Life Concert – Bo;da.” This episode documents each and every step of Lee Hyori and friends in recording, dance practices, band rehearsal, and dry rehearsal. Despite their busy individual schedules, Lee Hyori and friends Bae Da Hae, Jang Bum Joon, designer Yonni P, stylist Han Hye Yeon, photographer Hong Jang Hyun, and writer Lee Joo Hee are all running around from one place to another to put the show together. Each and every member of Lee Hyori’s social club “Golden 12” did their best and the friendship and consideration for each other in the group stands out greatly in the process of prepping for “Bo;da” concert.

This episode also shows Lee Hyori’s mini mental breakdown while practicing her choreographies. Before the practice session began, Lee Hyori watched herself performing “U Go Girl” and seemed reluctant to give it a try again. She kept saying, “Is that me? Are you sure? I don’t think so.” Once the music started to play, Lee Hyori started dancing so naturally that everyone in the practicing room praised her as a natural-born performer. However, it did not last long. Lee Hyori soon plopped down on the floor, complaining that she doesn’t remember the choreography. She seemed concerned when she confessed, “I don’t remember the dance to ‘Chitty Chitty Bang Bang‘ even more than ‘U Go Girl.’ Do I have to do this? I’m having a mental breakdown.”

Also in this episode of “Golden 12” will feature Lee Hyori’s boyfriend Lee Sang Soon. He is the music director of the “Bo;da” concert. He directed the “Golden 12” members in recording booths and participated in the band rehearsal as a guitar session. After seeing Lee Hyori and Lee Sang Soon being intimate with each other, members of “Golden 12” admired the couple with a little bit of jealousy, “They look so cute together.”