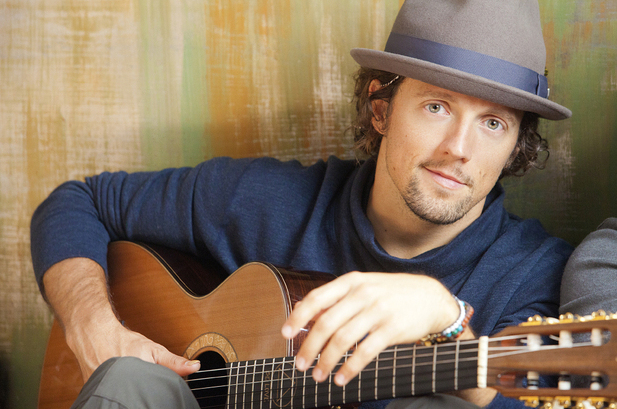 World famous pop star Jason Mraz has been garnering much attention in Korea because of his public praises of 17 year old guitar prodigy, Sungha Jung, and thinks so highly of Jung that he essentially wants to recruit him for his band.

He went on to say that “Sungha Jung makes the most beautiful music on YouTube,” continuing to say, “I thought as I watched him perform my own songs, ‘wow, this person needs to join my band.’ He’s really good…if there’s a chance, I’d like to meet him in person.”

Mraz possesses an excellent sense of rhythm, and listeners love him for the emotional melodies he creates on his guitar. However, he revealed that his guitar skills are self-taught, and that he never learned to play the instrument before high school.

Regarding why he chose Korea as his first world tour stop, he said “Korea is a good place to test new music and try new things.” He expressed much affection for his Korean fans.

Wearing a shirt with the Korean word for “peace” written across the front, Mraz showed a deep interest in peace, people, and environmental issues.

To hear more about his thoughts on love, peace, and the environment, tune into his interview tonight, June 18, at 7 p.m. KST on tvN’s “The World You Meet Through People”. You can find out more about Sungha Jung on his homepage.

Sungha Jung
KPLG
Jason Mraz
How does this article make you feel?