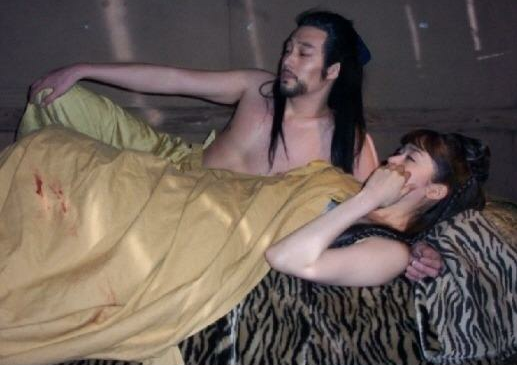 An old photo of Sung Yuri and So Ji Sub is garnering a lot of attention from netizens. The photos have been showing up on many online community boards with the title, “So Ji Sub, Sung Yuri Bed Scene from 9 Years Ago,” and show the two in period costume. The photo was snapped on the set of drama “Thousand Years of Love,” which aired nine years ago. So Ji Sub’s torso is exposed, and Sung Yuri’s bare shoulders are visible. The two look awkward in the photos, drawing laughter from viewers.

The drama featured time slips and told the love story of a princess, played by Sung Yuri, receiving much popularity at the time. Netizens commented on the photo, “So Ji Sub, Sung Yuri, seriously a cheap bed scene from 9 years ago?” “So Ji Sub’s exceptional beauty draws attention,” and “Sung Yuri looks fresh and different 9 years ago.”

So Ji Sub is currently starring in SBS drama “Ghost,” while Sung Yuri recently starred as the female lead in the movie “Detective Cha.”

So Ji Sub
Sung Yuri
KPLG
Thousand Years of Love
How does this article make you feel?