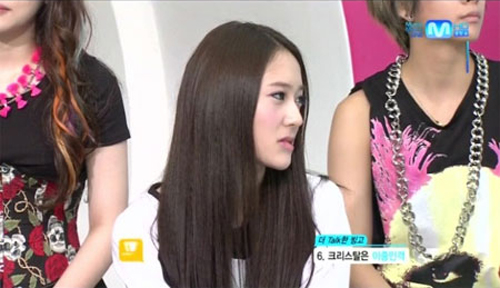 f(x)’s Krystal in Trouble Again for Her Facial Expression

Krystal from f(x) finds herself in a troubling situation again because of her facial expression. On June 14, f(x) made an appearance on Mnet’s “Wide Celebrity News” to hold a Q&A session with the MCs for their new song, “Electric Shock”. MC Hong Jong Hyun asked, “We hear Krystal has a dual personality,” to which Krystal reacted by biting her lower lips as if to suppress her anger. Krystal has been under fire for her hostile facial expressions in the past. On SBS’s “Happy Sunday Wedding Race,” she was caught staring down Kara’s Han Seung Yeon, which also became a hot topic.

People who felt her response was uncalled for commented on the likes of, “it’s also not good to show too much emotion on air,” while others defended her, saying it was inappropriate to use a word like “dual personality” in asking a question for a promotional appearance.