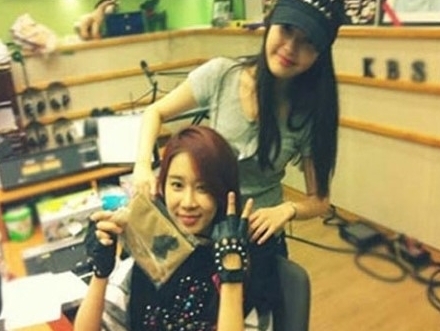 On June 18 during a live broadcast session of “Yoo In Na’s Raise the Volume,” Yoo In Na made a big announcement confirming her romantic relationship with “Queen In Hyun’s Man” co-star Ji Hyun Woo. She not only confirmed the news, but also explained her decision making processes and how she feels about the whole situation. Yoo In Na’s ended her long announcement by playing IU‘s “Peach.”

Soon after Yoo In Na’s announcement, one of the listeners of her radio show asked Yoo In Na, “What does IU have to say about this?” Yoo In Na answered, “She is having a mental breakdown. She’s more mature than I am, she’s like a mother. She was telling me things being like, ‘Unnie this, Unnie that.'”

Previously, Ji Hyun Woo surprised everyone, including Yoo In Na, by confessing that he truly loves Yoo In Na at “Queen In Hyun’s Man” fan event.

IU
Ji Hyun woo
Yoo In Na
Peach
KPLG
Queen In Hyun's Man
Yoo In Na's Raise the Volume
How does this article make you feel?