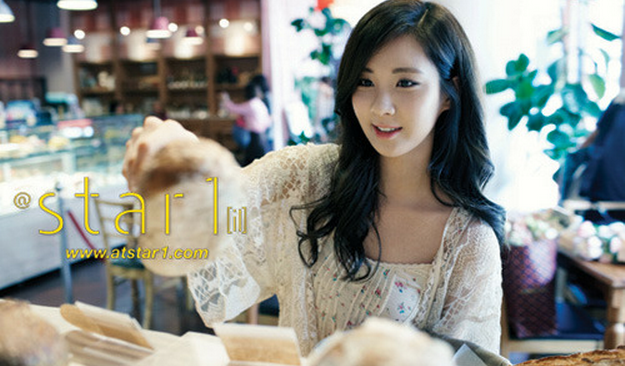 Girls’ Generation’s Seohyun, Yuri, Sooyoung, and Jessica recently shot a spread for the July issue of @star1. The shoot took place at the posh district of Cheongdam, using Tory Burch’s flagship store, 10 Corso Como, and other boutiques as its backdrop. Each member wore clothes and accessories that they personally like, emphasizing their individual styles. In the released photos, maknae Seohyun is seen enjoying herself at a hair salon and beautiful café.

In the interview following the shoot, Seohyun shared, “Initially, it was strange promoting as a group of three instead of nine. But as the time went by, it was so much fun, and I learned a lot. With only three members, there were so many more aspects, like stage manners and singing, to focus on. It was a learning experience.”

During her TaeTiSeo (Girls’ Generation’s subunit), Seohyun received tremendous attention among her fans for her beauty spot. However, she revealed, “It wasn’t a beauty spot, but a sparkle. The fans perceived it differently from the original purpose. I had no idea it would garner so much attention.”

The July issue of @star1, featuring the Cheongdam date with Girls’ Generation, will be available on June 21.