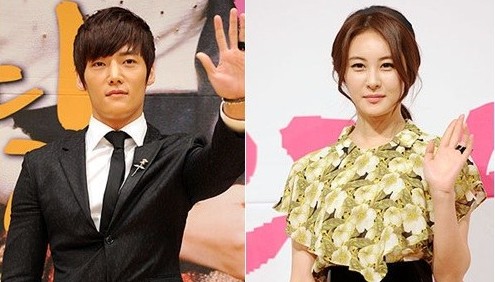 Love is definitely in the air as another celebrity couple has been revealed! This time it’s the blooming relationship between Son Eun Seo (“Love Rain,” “Spy Myung Wol“) and Choi Jin Hyuk (“I Need Romance,” “Pasta“).

According to news agencies on June 20, “Choi Jin Hyuk and Son Eun Seo, who have worked together on the SBS drama, ‘My Daughter the Flower’ are in a relationship. Through the drama, both of them had good feelings toward each other and they have naturally progressed into a dating relationship.”

New agencies report that Choi Jin Hyuk and Son Eun Seo like to enjoy dates in Garusugil in Seoul. A photo of them wearing matching jumpers was released last April, which drew many eyes as well. Many netizens wondered if they were really couples back then.

Netizens who came across this news commented, “Choi Jin Hyuk and Son Eun Seo are a real couple? Daebak,” “They look good together,” “I hope this isn’t a rumor but I hope they are really dating,” and more.