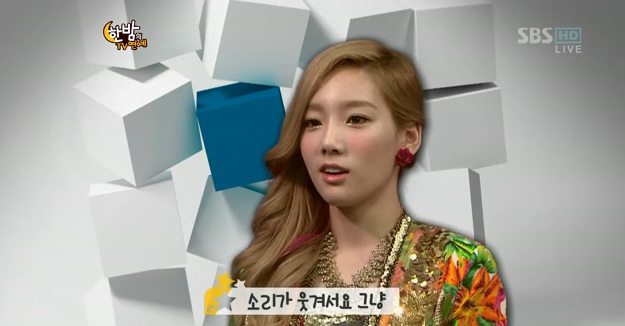 Taeyeon explained why she laughs so much at jokes involving fart sounds. On June 20, all three TaeTiSeo members appeared on SBS “One Night of TV Entertainment” for a group interview session. TaeTiSeo members asked each other questions for the segment, and during Taeyeon’s turn, Seohyun asked, “Why do you always laugh so hard at fart jokes?”

“Oh, the sound is just too funny,” Taeyeon replied, but she seemed to be holding in her laughter. She tried to continue, and said, “The sound is…” but she couldn’t complete the answer as she burst out laughing.

“Of course, the sound is really funny. But I also like jokes involving a lot of shouting,” Taeyeon added.

As previously reported, Taeyeon is a big fan of fart jokes and has had difficulty on variety shows holding in her laughter after hearing such jokes.

One Night of TV Entertainment
Taeyeon
TaeTiSeo
KPLG
How does this article make you feel?