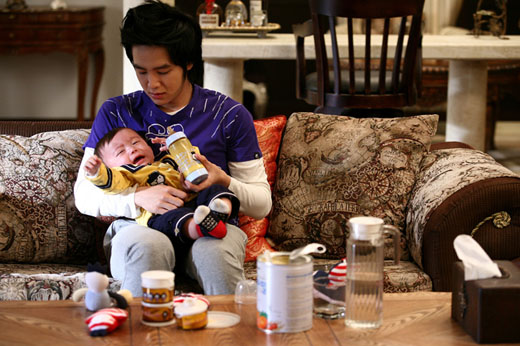 Jang Geun Suk unveiled his text to his “Baby & I” co-star Mason Moon (aka baby Nichkhun). The upcoming episode of “Made in” segment of TV Chosun’s “Celeb in TV – the TREND” will feature hallyu star Jang Geun Suk.

Producers managed to catch up with former co-stars, CF directors, colleagues, and others to investigate every little secret of the star. One of the sources also revealed a text message between Jang Geun Suk and his “son” Mason Moon from the movie “Baby & I.”

In the messages, Jang Geun Suk wrote, “It’s me, Jang Geun Suk. How are you??? kkk Mason, do you recognize me now??” and attached a photo of himself. The “Prince of Asia” humored his fans with his desire to be recognized by none other than his “son.”

TV Chosun “Celeb in TV the TREND” will air its next episode, featuring Jang Geun Suk, this Saturday, June 23, at 11AM KST.