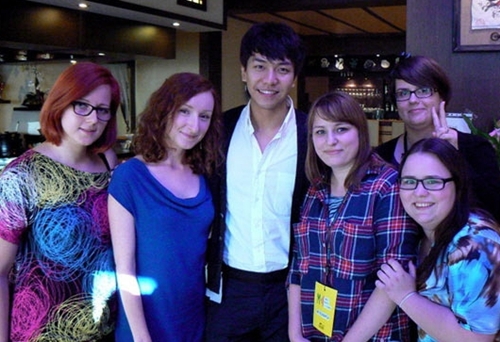 Recently, a foreign fan of Lee Seung Gi posted on twitter, “We took a picture with tall handsome Lee Seung Gi,” along with a picture. The revealed picture shows Lee Seung Gi in what seems like to be a Korean restaurant with five foreign female fans around him.

He has his arms around these women, gently looking into the camera with a smile on his face. As this was a personal trip, Lee Seung Gi is not wearing any make up or on-camera outfit. But he still looks dandy and handsome in this white shirt and black cardigan. The five women around him seem really happy to see him with huge smiles on their faces.

Netizens commented, “Lee Seung Gi’s evolving from ‘National Little Brother’ to ‘World Little Brother,'” “He’s so nice,” “I’m so jealous,” “He must’ve gone there to grab a bite,” “I read in the paper that he went to Poland to watch a soccer game,” “I hope these foreigners realize how much of a big deal it is to take a picture with him,” and “Lee Seung Gi’s charms transcend national boundaries!”