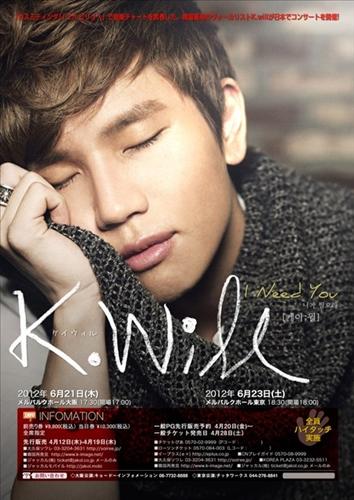 Music
by D. Kim
Tickets to the talented and soulful ballad crooner K.Will‘s performances in Osaka on the 21st and Tokyo on the 23rd as part of his 3rd mini album promotion titled “I Need You” completely sold out – solidifying his popularity in Japan.

Lucky K.Will fans filled the stadiums to capacity as they were captivated by his performance of tracks such as “I Need You” from his 3rd mini album, “Left Heart“, “A Tear in a Second,” “Missing, Missing and Missing you” as well as many other hit tracks. K.Will prepared stage outfits that held visual appeal as well as a session where the artist could share a personal word with the attendees.

In a letter K.Will dedicated to his Japanese fans he read to them, “There have been times when I feel lonesome and shed a couple tears. But every time I do, when I think of you fans, I remind myself to never desert the support you all have given me. To simply say you all are precious to me is not enough – to express how I feel I wish to sing you this song.” To which he then opened up with the song “I’ll Be With You.”

Check out K.Will’s newest title track “I Need You” featuring an appearance by Sistar‘s Bora and the song he dedicated for his fans below!

Japan
KPLG
K. Will
3rd Minialbum
I need You
How does this article make you feel?