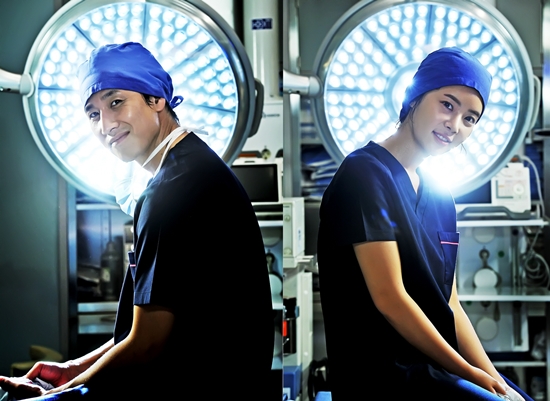 Netizens and fans are already predicting the birth of a “golden” (on-screen) couple between Lee Sun Kyun and Hwang Jung Eum.

Along with Lee Sun Kyun and Hwang Jung Eum, others like Lee Sung Min and Song Sun Mi have also participated in this poster shoot. The actors are seem in their characters at a hospital in the photos.

Eyes were especially drawn to Lee Sun Kyun and Hwang Jung Eum, who displayed a natural couple feeling. Their chemistry as young resident interns is already being felt through these stills, which is heightening the anticipation for this drama. The PD for this drama, Kwon Suk Jang, have created other “golden” couples in past dramas such as Lee Sun Kyun and Gong Hyo Jin in “Pasta” and Song Seung Hun and Kim Tae Hee in “My Princess.”

News agencies report that the actors were in high spirits during the photo shoot. While posing with various medical equipment, Lee Sun Kyun stated, “Whenever I put on a doctor’s gown, I feel a deeper mission within myself,” which showed his great focus for his character in this drama.