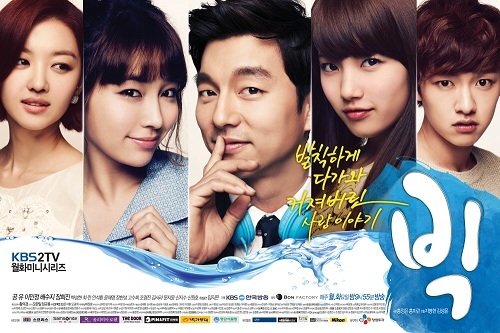 Which Drama Did “Big” Parody in the Latest Episode? (Spoiler Alert!)

In the most recent episode of “Big,” there was a parody scene of the hit drama, “The Moon that Embraces the Sun,” which made many viewers laugh.

During the episode, Jang Mari (played by miss A‘s Suzy) and Gil Choong Sik (played by Baek Sung Hyun) go to a shaman in order to switch Kang Kyung Joon (played by Shin Won Ho) and Seo Yoon Jae’s (played by Gong Yoo) souls back to their rightful places.

When Mari described the situation to the shaman, the shaman answered, “For this type of situation, we need some black magic and a human male talisman.” This line clearly is a parody of the MBC hit drama, “The Moon That Embraces the Sun” since Han Ga In‘s role Yeon Woo was a shaman talisman.

After hearing the shaman’s reply, Mari stated that Choong Sik will be the human talisman. Then the shaman asked again, “What is the connection between the two souls?” Then Mari answered, “Both of them like one woman.” Immediately, the background music for “The Moon that Embraces the Sun” was played, which once again brought on much laughter.

Don’t forget the check out “Big” every Monday and Tuesday!

The Moon That Embraces the Sun
Big
KPLG
How does this article make you feel?