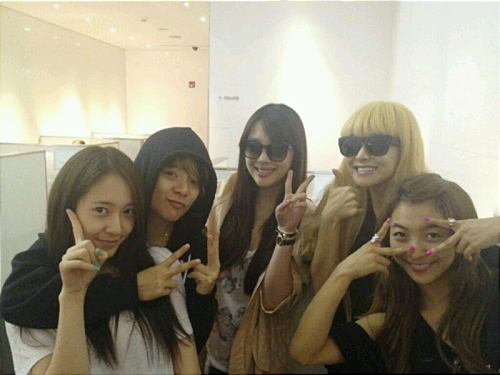 What a battle for No. 1 between the top two songs this week! f(x)’s “Electric Shock” out dueled last week’s champion Wonder Girls’ “Like This” by the tiniest margin of a single point (967 Vs 966) to become our new No. 1 song. The two songs are very even on every chart source, with f(x) slightly ahead on five sources and Wonder Girls on three sources. That proves to be the difference. “Electric Shock” just debuted at No. 9 last week. We thought it would have taken another week to reach the top, but the song made a big jump just enough to win this week. These 2 songs will continue to battle for the top spot next week.

This is not the first time this year that the top two songs are separated by only one point. The last time it happened was on February Week 3 when FT Island’s “Severely” edged Seven’s “When I Can’t Sing”.

A third song would have joined this battle is at a distant third. Big Bang’s “Monster” moves up another two spots to No. 3. With Big Bang not actively promoting this song, it was not listed on some of our chart sources at all. Still, it is quite an accomplishment to be in the top three without promotions.

Only one new song is in the top 10 this week. At No. 10 Dal Shabet moves up four spots to the top 10 with “Mr. Bang Bang,” the title song from their first full length album. “Mr. Bang Bang” is a cool pop dance number with exciting beats. The lyrics are about a girl who confesses her love for a shy boy who can’t seem to express his love first.

This is the last music chart in the first half of 2012. We are going to release our half year top 10 list in the middle of next week. Are your favorite artists making the top 10? Stay tuned!

Not every June has five weeks and when I am looking for songs from past years’ charts, I just treat it as the last week of June, whether it is week 4 or week 5. Nevertheless, the song that I want to cover did come from a June week 5 in 2007.

Yangpa has been in the music industry for a long time. Debuting as a teenager in 1996, she released her first three albums from 1996 to 1999. Then she went aboard to study in the famous Berkeley School Of Music. After she came back to Korea she released her fourth album in 2001. Due to a contract dispute with her record company, she did not come out to perform and then went on a lengthy hiatus. It wasn’t until six years later in 2007 that she released her fifth album “The Windows Of My Soul.” The long layoff doesn’t affect her a bit as the title song “Love…What Is That?” written by hitmaker Park Geun Tae, spent four weeks on top of our chart. June Week 5 of 2007 was the third week this song was on top. Known for her emotional vocal, “Love…What Is That” seems to be a tailor-made song to fit Yangpa’s voice. This song went on to become one of the most popular songs in 2007. In my opinion, it was also one of the best ballad songs by a female soloist in the last decade.

Unlike other K-Pop artists these days, Yangpa doesn’t release new songs very often. She is looking for new concepts on each album. She released a mini-album earlier this year and just recently, she participated in the OST of the drama “A Gentleman’s Dignity” with the song “Love…What To Do”. From the title, it is very similar to “Love…What Is That” but the melody is totally different.