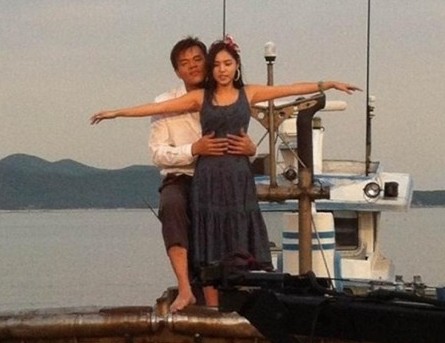 For Saturday Night Live, JYP copped a feel of Min Hyo Rin’s chest! On June 30, JYP wrote on his me2day, “Is there a movie that you are reminded of? Look at the name of the boat…” JYP posted a picture showing Min Hyo Rin and JYP doing a parody of the iconic back hug scene of the film “Titanic.”

(It appears that the two made an appearance on SNL in order to promote the film, “5 Million Dollar Man.”)

The picture that was released on JYP’s teaser doesn’t show you the scene of Min Hyo Rin’s chest. That was a part of the SNL episode, as you can see in the screen shot at the bottom.

Netizens that came across the picture stated, “Where did he put his hands on Min Hyo Rin?” “Look at his expression, whatever he does should be labeled for ages 19 and over,” and “This is great!”

JYP was the host of the SNL Korea episode broadcast on June 30.