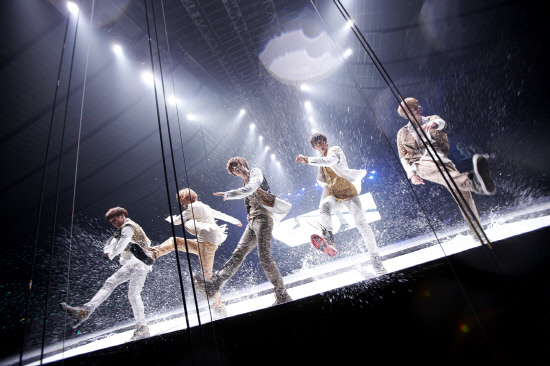 “SHINee The First Japan Arena Tour-SHINee World 2012” began on April 25 and since has gone on to hold a whopping twenty concerts throughout Japan. The tour made stops in Fukuoka, Hokkaido, Nagoya, Osaka, Kobe, Tokyo, and Hiroshima. In total the tour attracted an impressive 200,000 fans, affirming SHINee’s popularity in Japan.

Their first ever Japanese arena tour set a record for the most people in attendance for a Korean act in Japan. Their Japanese debut single “Replay (You’re My Everything)” was released in June of last year. Since then, SHINee has gained quite a following and the group showed their growth by further confirming their high status as idols.

The group gained explosive reaction from the local fans in Nagoya (once), Osaka (three times), Tokyo (twice), and additional performances were held due to the overwhelming response. SHINee received much acclaim from the Japanese press for their excellent live skills, which was described as a splendid blend of colorful attractions and mature stage performances.

The tour concluded in Hiroshima, on June 30 and July 1, at the Hiroshima Green Arena. During the performance, SHINee performed a total of twenty-nine songs including their latest single “Sherlock” as well as their past hits, “Replay (You’re My Everything),” “Lucifer,” and “Juliette.” The members even had a chance to display their individual talents as they participated in special individual stages. Each night they gave their all in front of a fantastic crowd of enthusiastic concert goers.

After completing their activities in Japan, SHINee will move on to South Korea later this month. “SHINee Concert- SHINee World II” will be held on July 21 and 22 at the Seoul Olympic Park Gymnastics Stadium. This might be the group’s second Korean concert but a fervent reaction can be expected from their domestic fans as well.

SHINee
Japan
KPLG
arena tour
2012
How does this article make you feel?