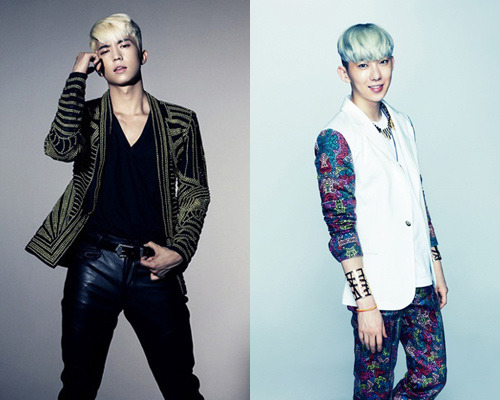 Recently, 2PM‘s Wooyoung told Kuki News that he postponed his own first solo album release date because of his best friend Jo Kwon from 2AM. In his interview, Wooyoung was asked about the rivalry between him and Jo Kwon as they both made their debuts as solo artists this summer. Wooyoung explained, “Since we are friends, we told each other that we will be cheering for one another despite of what others have to say.”

Jo Kwon’s first solo album “I’m Da One” was released on June 25 while Wooyoung’s “23, Male, Single” was released two weeks later, on July 8. Wooyoung stated that such different release dates were settled on purpose. He said, “We both knew we were preparing our very first solo albums since last year, but wasn’t sure when these albums were going to get released. We were both really busy working on these albums, and finally got to talk to each other about how things are.”

Wooyoung added, “When I told Kwon about my solo album, he said his was ready, too. So we talked about it and found out that we both planned on releasing our albums around the same time. It might even have been on the same day. I just thought it was wrong to compete against my own friend like that, so I postponed my album release date by two weeks.”

Wooyoung will be holding his very first solo album showcase in Seoul on July 9 and officially begin his solo career.

2AM
2PM
Wooyoung
KPLG
Jo Kwon
I'm Da One
23 Male Single
How does this article make you feel?