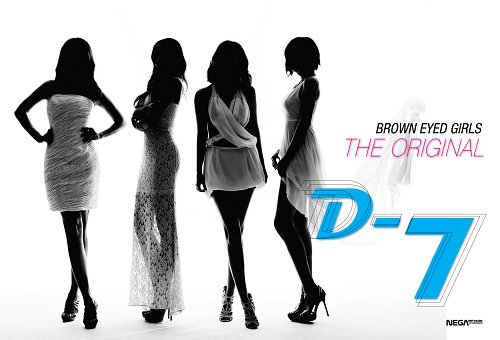 Brown Eyed Girls are going to make a comeback after eight months. After receiving a lot of attention last year with their fourth album, “Sixth Sense,” they took a break while appearing in dramas and television shows.

On July 10, Brown Eyed Girls are gaining much attention after a teaser image was released along with the words, “Brown Eyed Girls THE ORIGINAL D-7.” It appeared on their official homepage and even on the twitter page of Lance, who is a representative of their agency. Also, there are many D-7 posters hung throughout Seoul, which also helped in getting people’s interest.

In the teaser image, the members of Brown Eyed Girls can be seen dressed in white while their bodies are silhouetted. It adds to the curiosity of what their makeup and music concept will be like.

With news of them preparing solo albums, it is a surprise to see the Brown Eyed Girls make a comeback as a group after quite some time. Fans are expressing their anticipation for the album by saying, “I think it’s a surprise gift for the summer,” and “I am happy that I will be able to listen to real music by a truly talented group in the music industry. I wish they made a comeback sooner.”

The songs on Brown Eyed Girls’ album will be revealed on July 17.

Brown Eyed Girls
sixth sense
How does this article make you feel?